Names are often a good indicator of one’s age.  Take my name, Don or, officially, Donald.  It’s unlikely that you’ll see it on the roster of children registered for kindergarten these days.  Even Walt Disney’s Donald Duck and McDonald’s Ronald McDonald haven't saved it.  Usually my name is more likely to show up in the list of alumni at 50-year reunions.  Similarly, I’ve never spotted it anywhere in the Bible.  I suspect 2015 years from now it will have gone the way of names like Abinadab and Zebedee.  Now, Anna’s are a different story.

Anna’s endure.  There’s an Anna in the Gospel of Luke, and Annas have appeared throughout history books ever since.  Wikipedia lists 17 towns and geologic features named Anna.   Karen and I saw our first Anna’a hummingbird this year.  And so, 2015 seems to be the year of the Annas.   Besides that darting feathered creature that Karen photographed, I’ve been presented with photos of two different Annas — grandchildren of friends.  One, “would I be willing…” and one whom I had seen in a photo album where I said, “would you be willing,,,?”

Somehow I think many future generations of artists (hopefully even in the year 4030) will be looking at images of Annas and think, “I have to paint her.”  As for Donalds — we’ll just have to wait and see. 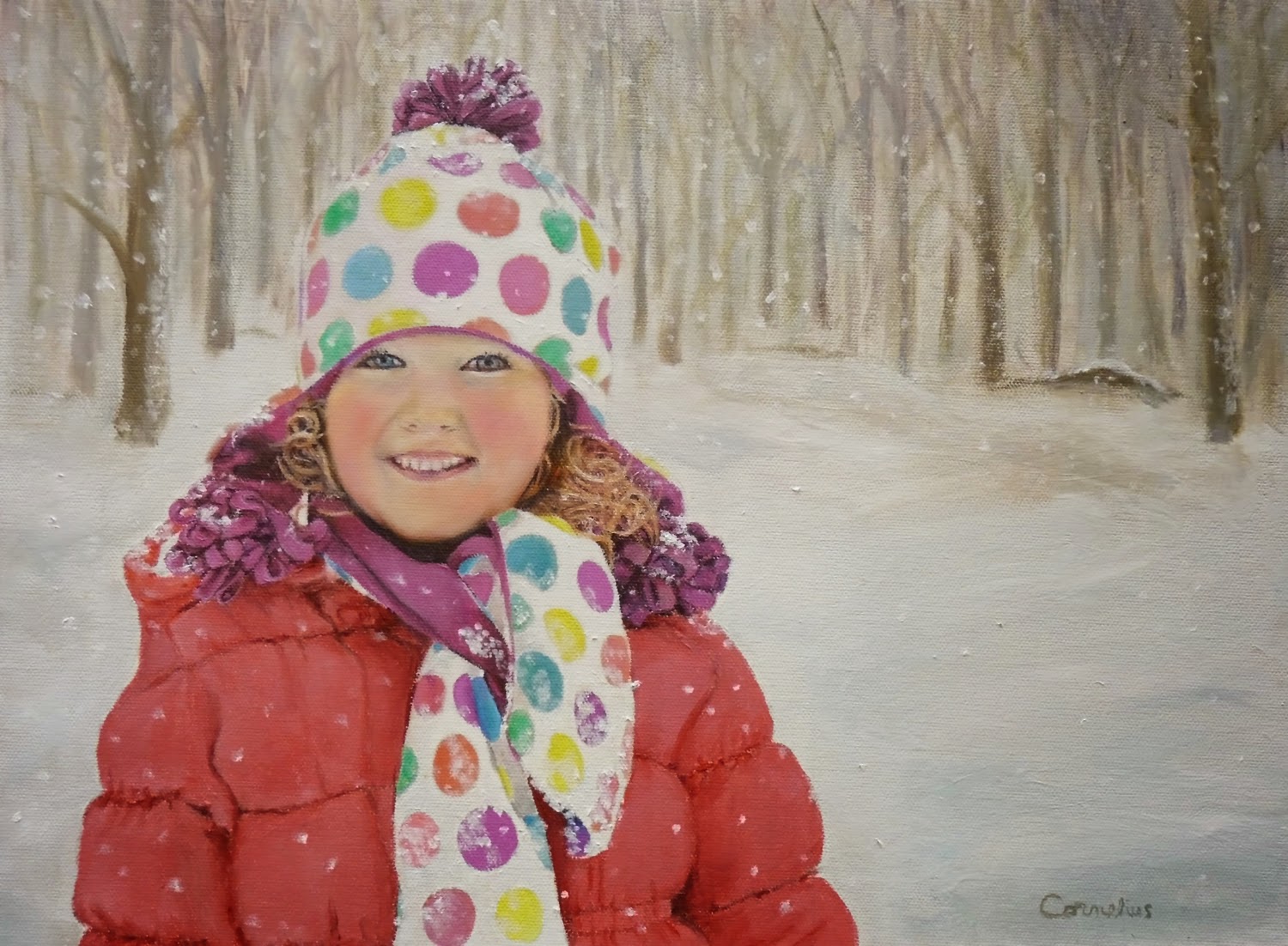 Anna Page    12 x 12 inches    Alkyd on Canvas.  I edited the photo of this Anna to just include the upper portion of her body, although the full image added another dimension to her character.  It just needed a larger format.  I added the snow flurry to the painting as per "grandma's" request. 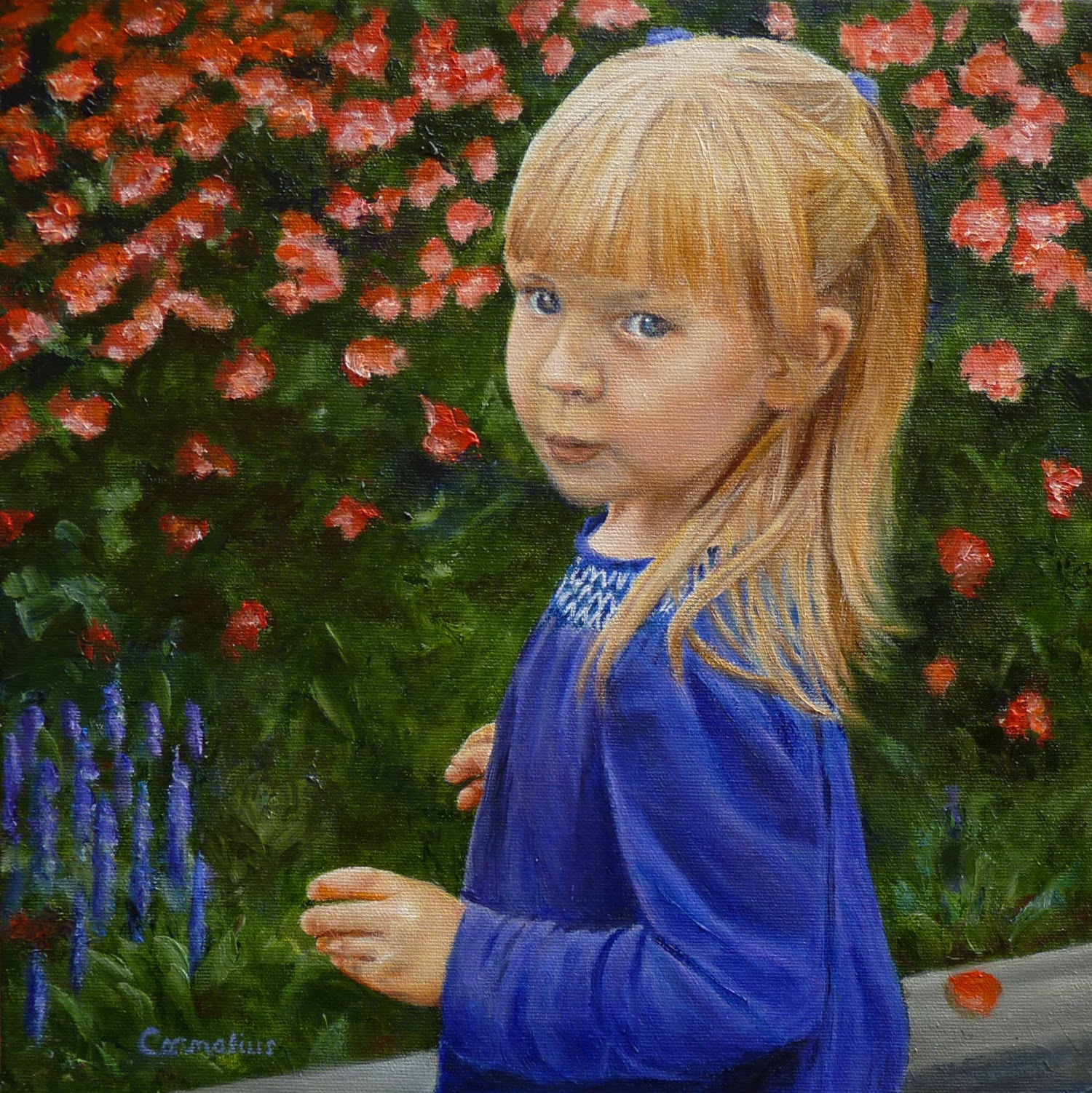 Anna in the Garden  12 x 12 inches  Alkyd on Canvas.  I changed some of the flowers in this garden from white something or others to lupines that matched the color of Anna's dress.  Future generations of Annas will never know.

Posted by Don and Karen Cornelius Artwork at 5:10 PM 2 comments:

With two sunny days on the Oregon coast committed to our memory banks, Karen and and I were already tallying up our options for how to savor our last two days lazing among those rays.   Should I paint at this log or that one, where was the best spot on our deck to read without getting too much sunburn, did we have enough sunscreen?  Two days had converted us into sun addicts so that we now drooled at the thought of our next daily fix.  We went to bed anticipating waking once again to golden rays flooding our bedroom. 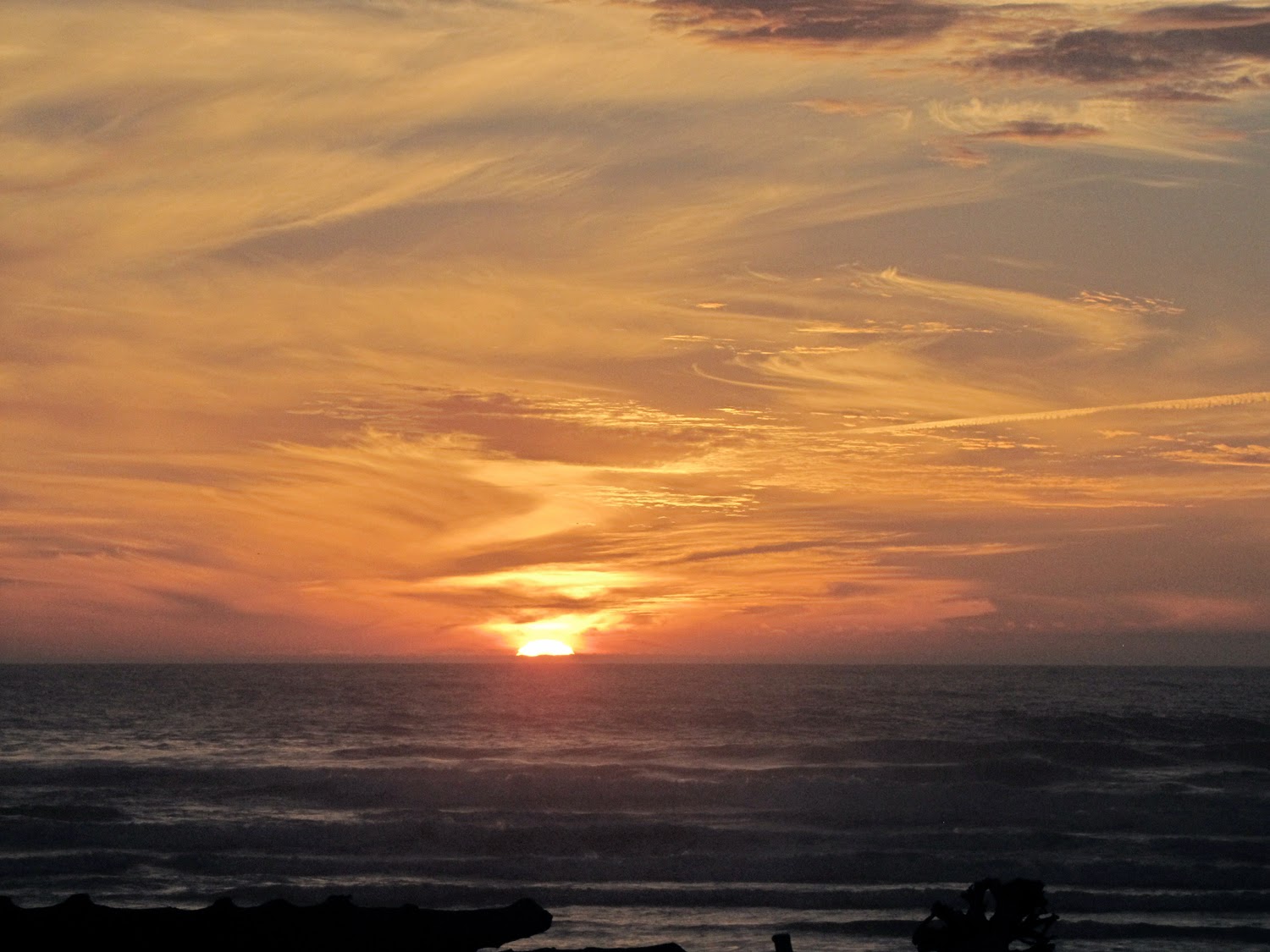 Red skies at night, sailor's delight.  So the adage goes.  However, we weren't on the ocean.  We were 100 yards further east, so...

While Oregon was indeed sunny for those last two days, the offshore ocean fog bank laying over the Pacific had other plans.   Yes, inland it was sunny.  Not so our temporary home.  Like an over-stuffed waffle iron, the surplus fog spilled over totally engulfing our beach for the next two days.  What were we to do?  Run into Tillamook to buy new tires for our car, of course.  Oh yes — and then savor the mystery of the fog. 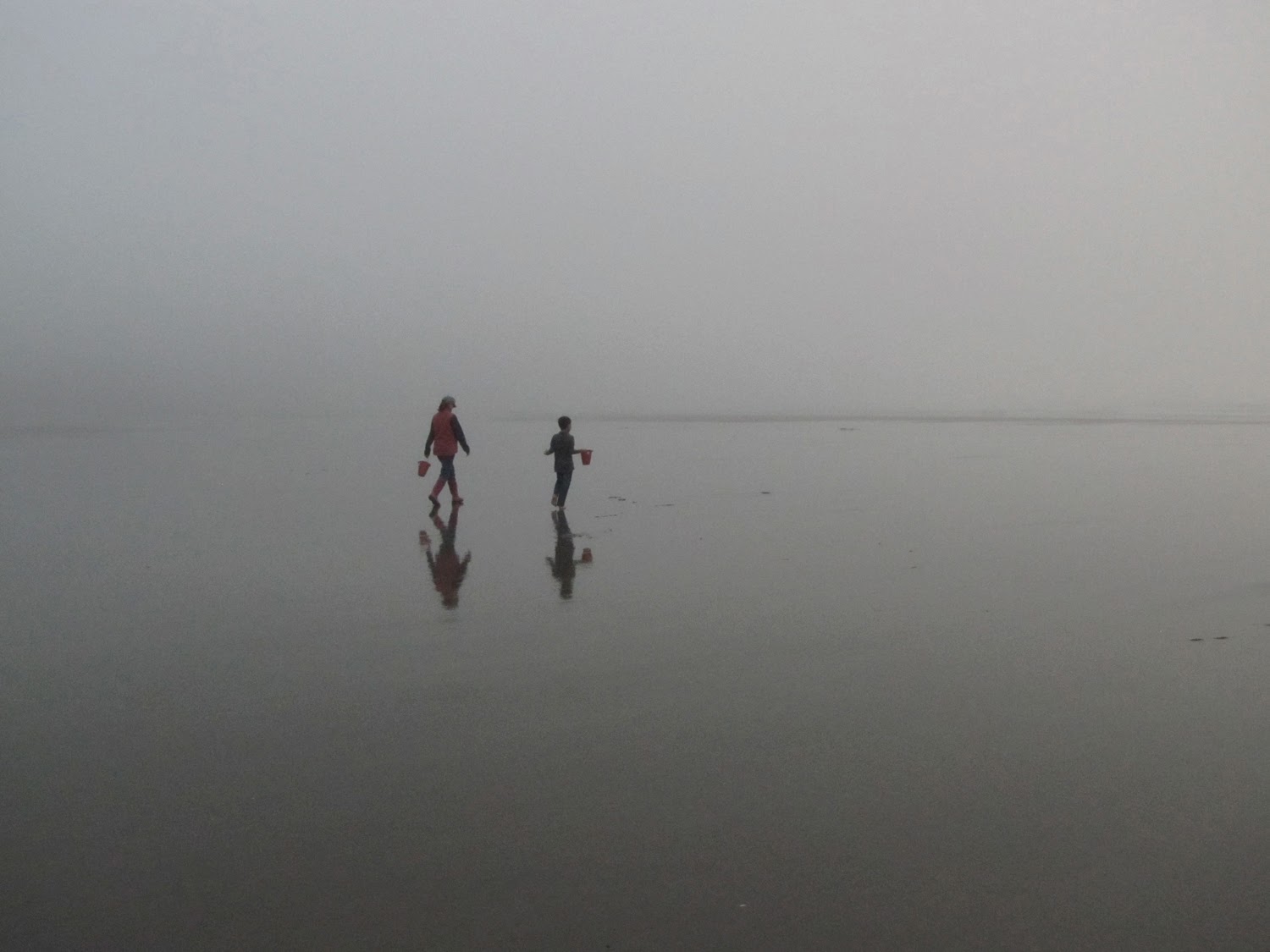 Yes, the ocean is out there -- somewhere. 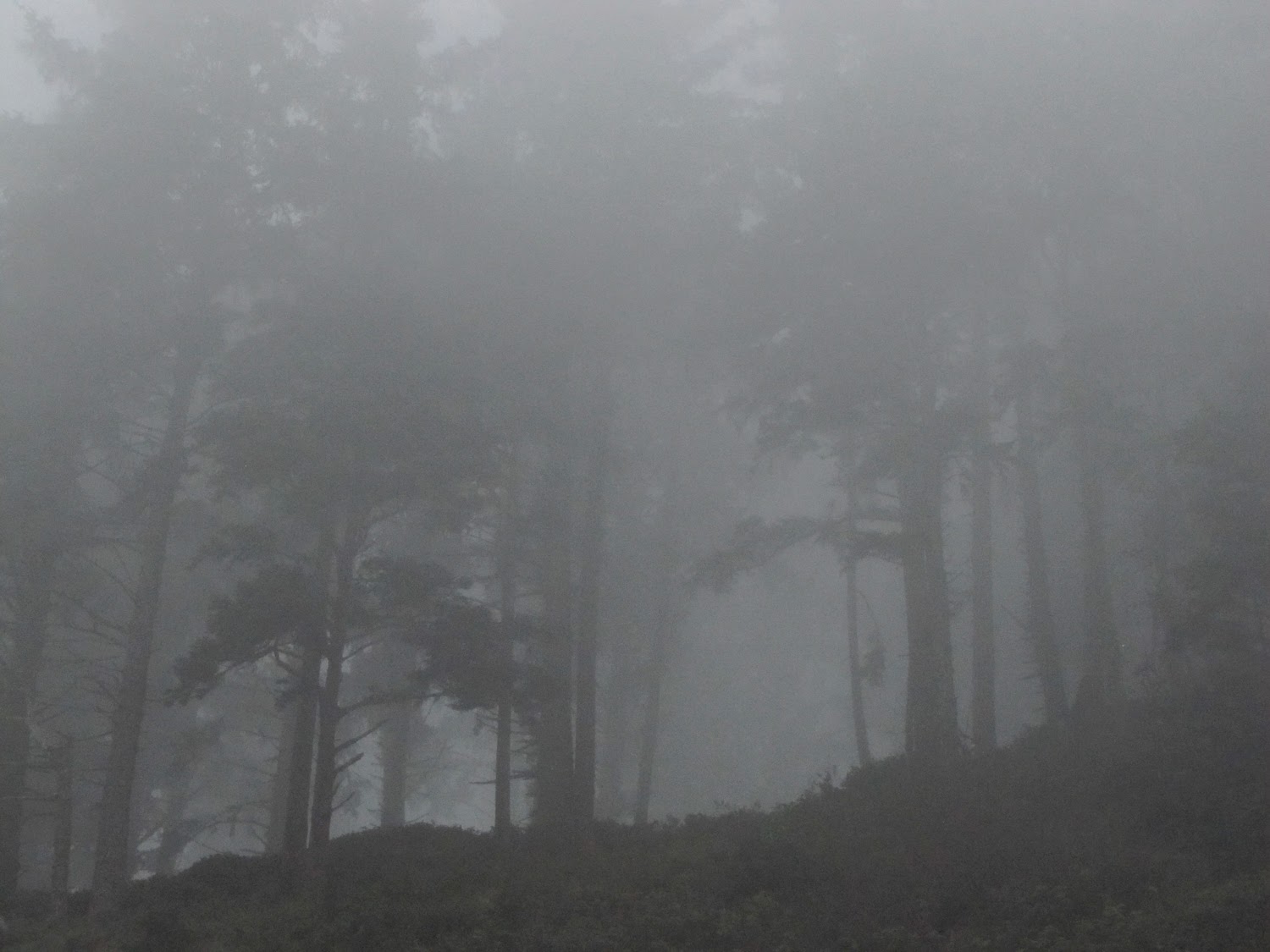 We photographed this forest above the coast more than once, but this is my favorite image of it. 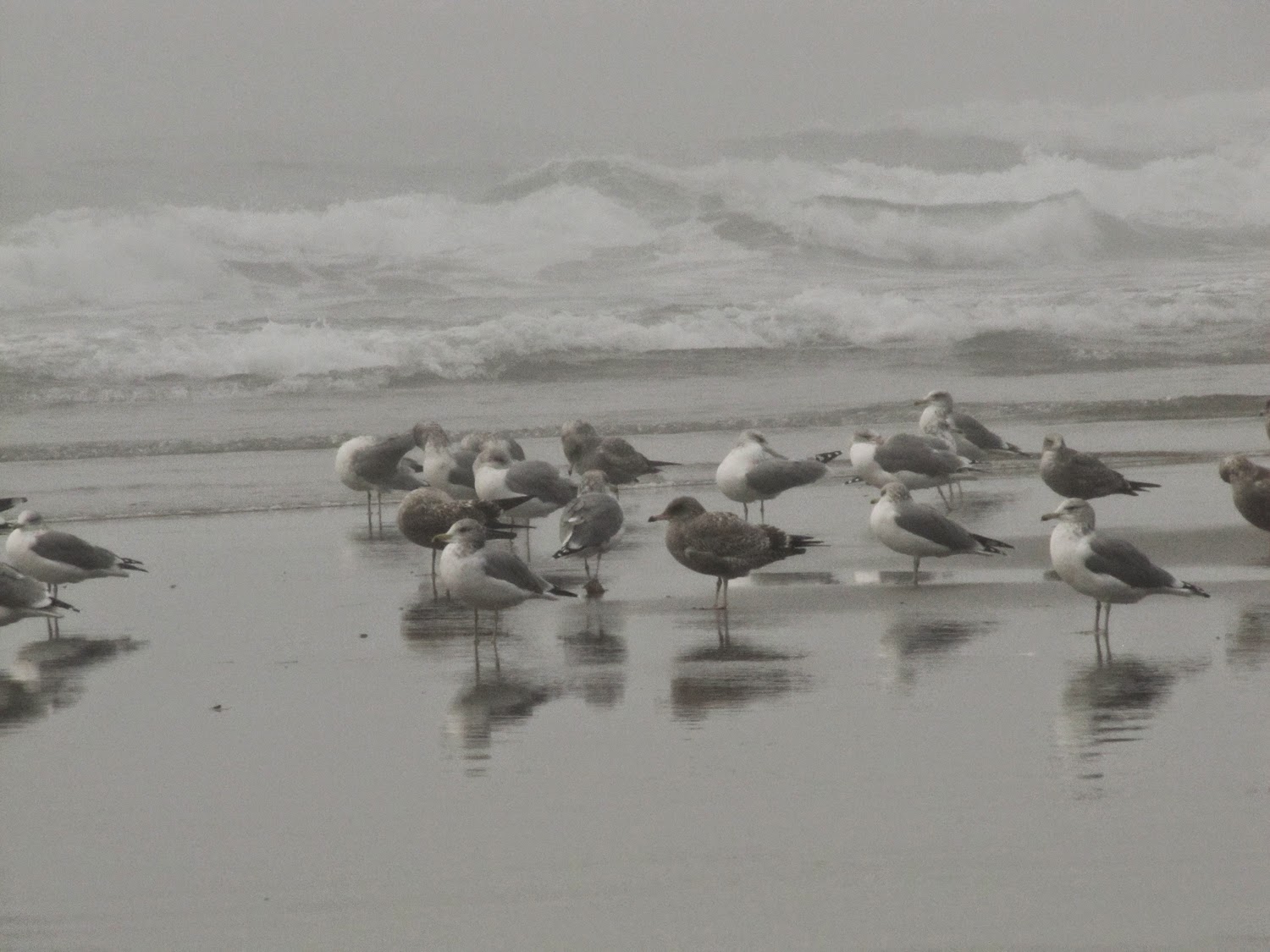 Why fly in the fog under IFR (instrument flight rules) conditions when you can... 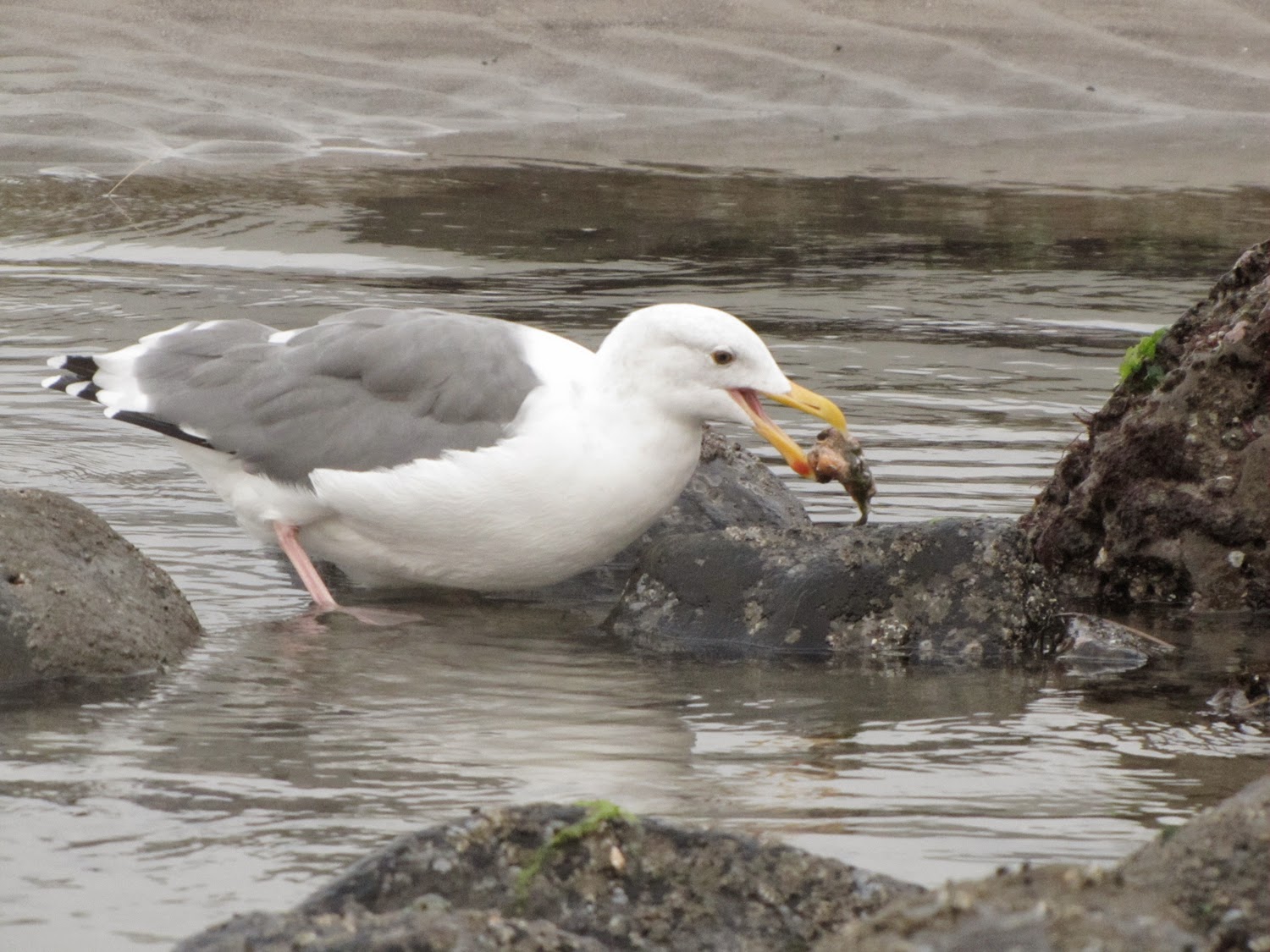 Find a yummy dead or soon to be dead delicacy among the rocks.  It made Karen and me so hungry we had to rush home for dinner. 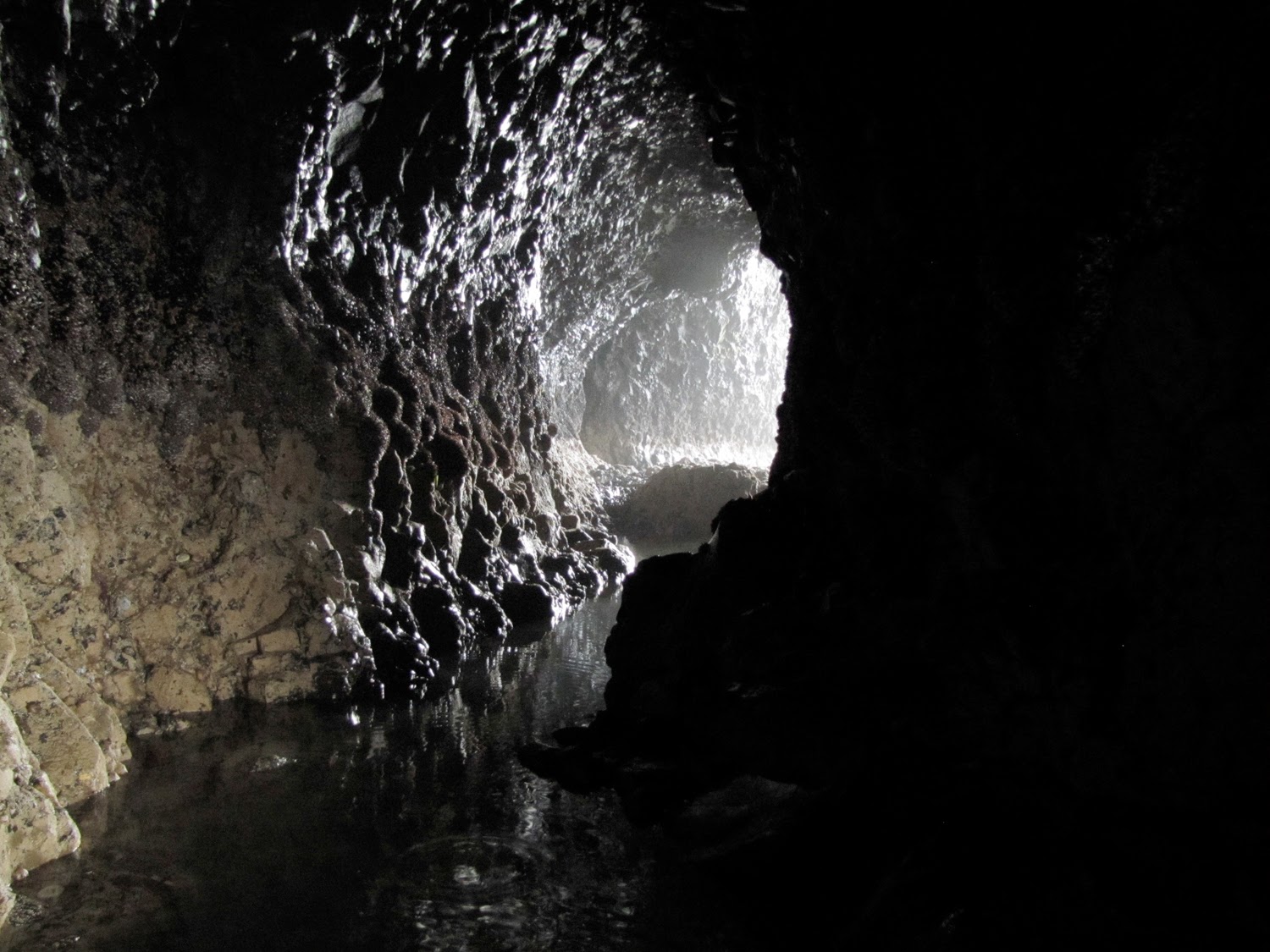 Minus tides revealed a sea cave under the Cape that we hadn't spotted during earlier explorations.  As usual it took Karen's keen new cataract-free eyes to spot it.  Me -- I left my shoes in the car so was too focused on avoiding sharp rocks to notice. 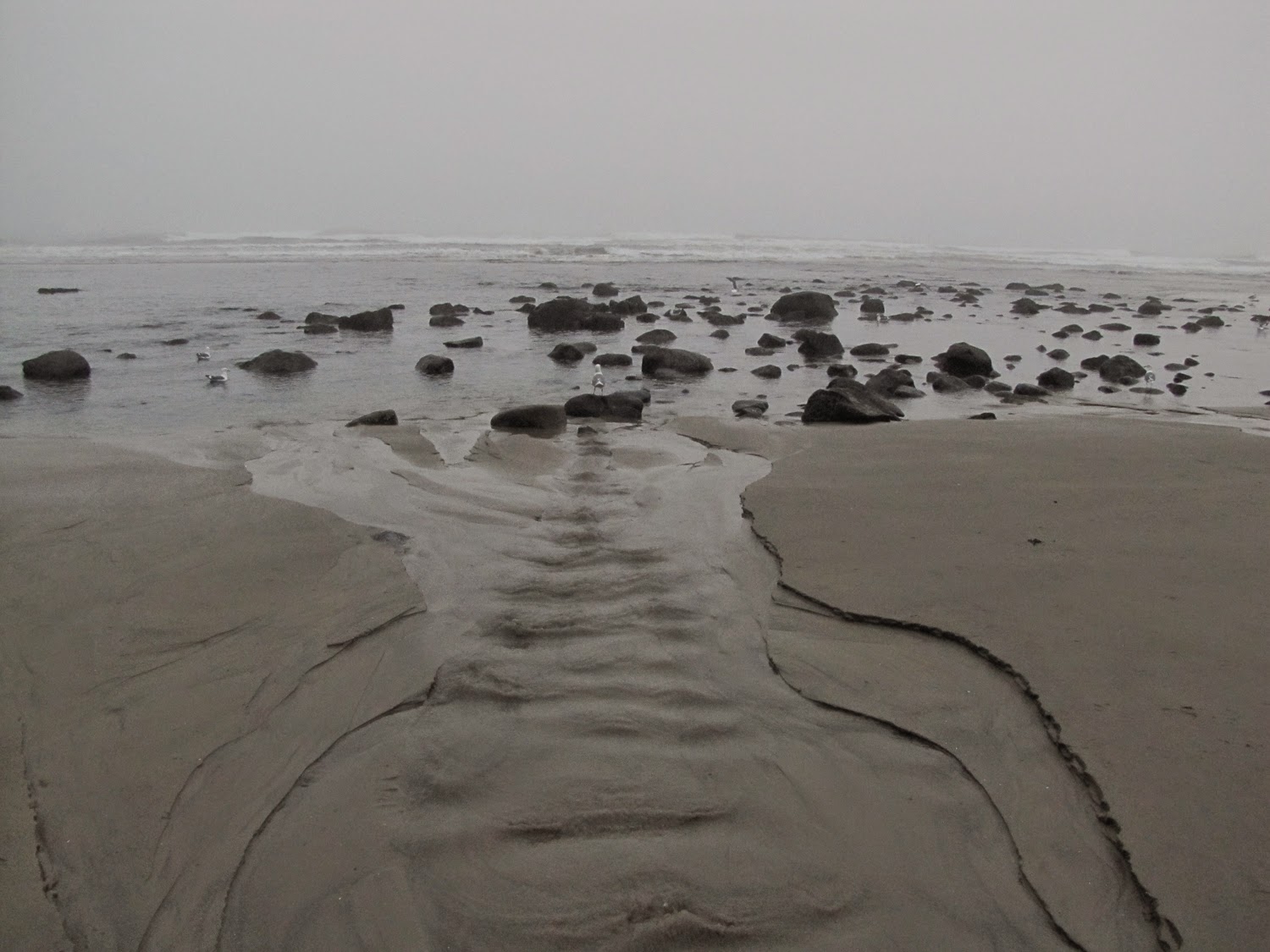 And so ended our "sunny" last two days on the beach at Cape Meares.  It was time to load the car and head north to Alaska.

Posted by Don and Karen Cornelius Artwork at 5:16 PM No comments:

As Karen will attest, communication is not necessarily my forte.  Some of us males are notorious for that trait.  Such proved to be my undoing when I sat down for a haircut at a Forest Grove, Oregon, barber shop.  As I sat down, Rick, the barber, asked for my glasses.  No problem.  Barbers don't cut around ones ears when the hair lies buried beneath the stems of a pair of specks.

He asked what I wanted and, as I do at home, I said I wanted to look like my friend, Terry Wolf.  However, since Rick had never seen Terry, he said just by looking at my shaggy mane he could tell what my last haircut looked like.  Wrong!

With that he clasped the front of my grayed locks indicating how much he proposed to lob off.  Without my glasses all I could vaguely see was some blurry guy sitting in what I knew was a barber chair with a form standing over him holding what I presumed were hands near the top of the blurry guy's (my) head.  I guessed Rick was proposing to take too much hair off so I eloquently stated "less," meaning, as anyone would sure know, take less off.  Rick interpreted my "clear" utterance to mean, leave less on.  With that he proceeded to make a vast cut into the already diminished hairline north of my brow.  A single cut at that strategic location and we had reached the point of no return.   I grimaced with each ensuing snip as Rick proceeded to undo all the months of growing the meager number of strands I used to camouflage my receding hairline — my ever-widening bald spot — where historically I sported a cowlick.

I've had shorter haircuts -- when my dad took hand clippers to my head turning my hairline into something resembling a scrub brush that had been left in the yard and run over with a gas-powered lawn mower, maybe a tad shorter.  I guess the good side is, I won't need another haircut for maybe two years.  As for the bald spot -- I'm glad it's beyond my field of vision.  The down side -- maybe my field of vision, but not that of the Oregon sun. 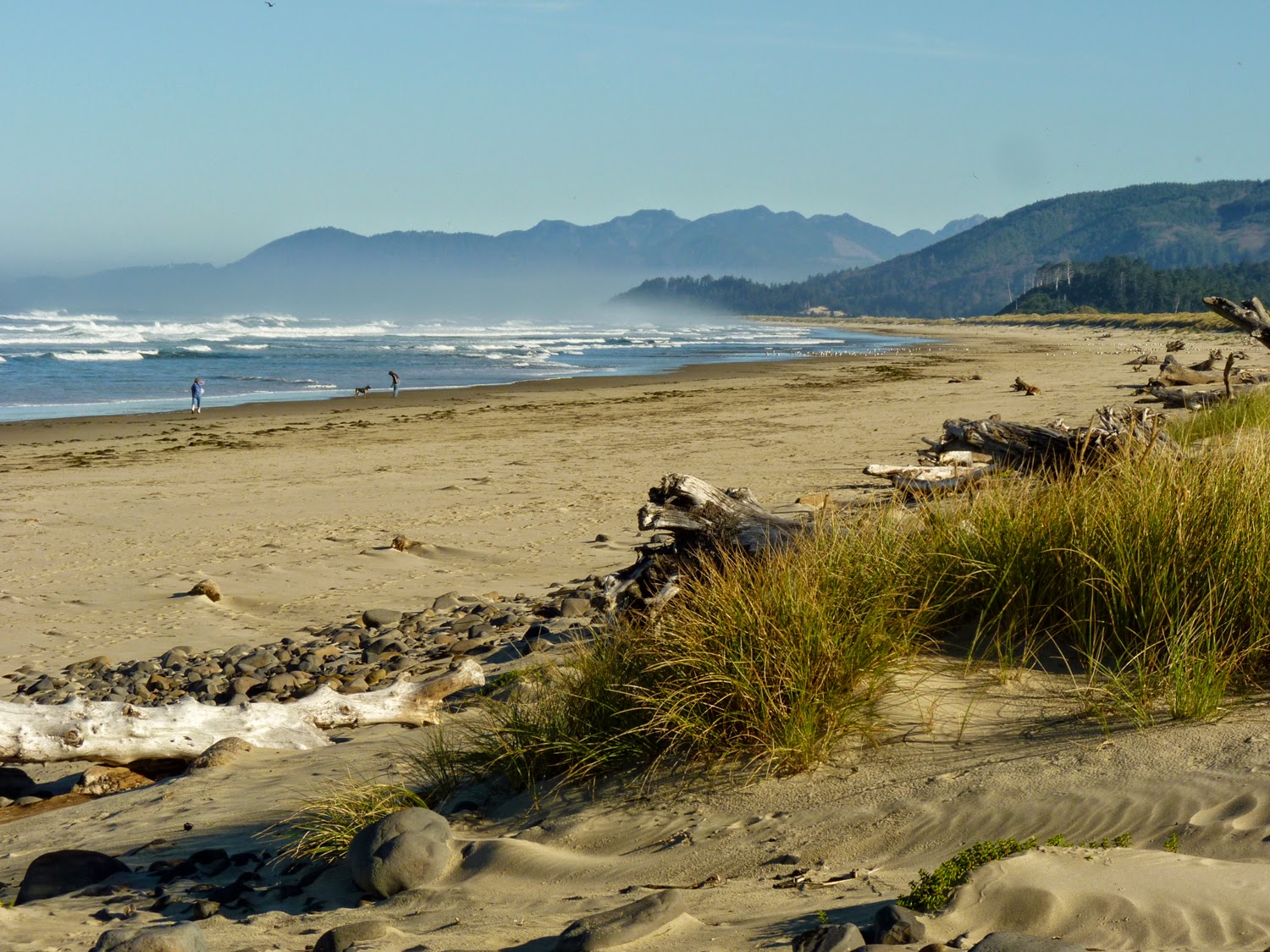 With my newly scalped head and Karen with her new eye lenses we headed for Cape Meares, Oregon, for a much anticipated four relaxing days to unwind.  It wasn't too difficult to settle into our vacation rental with a northerly view like this. 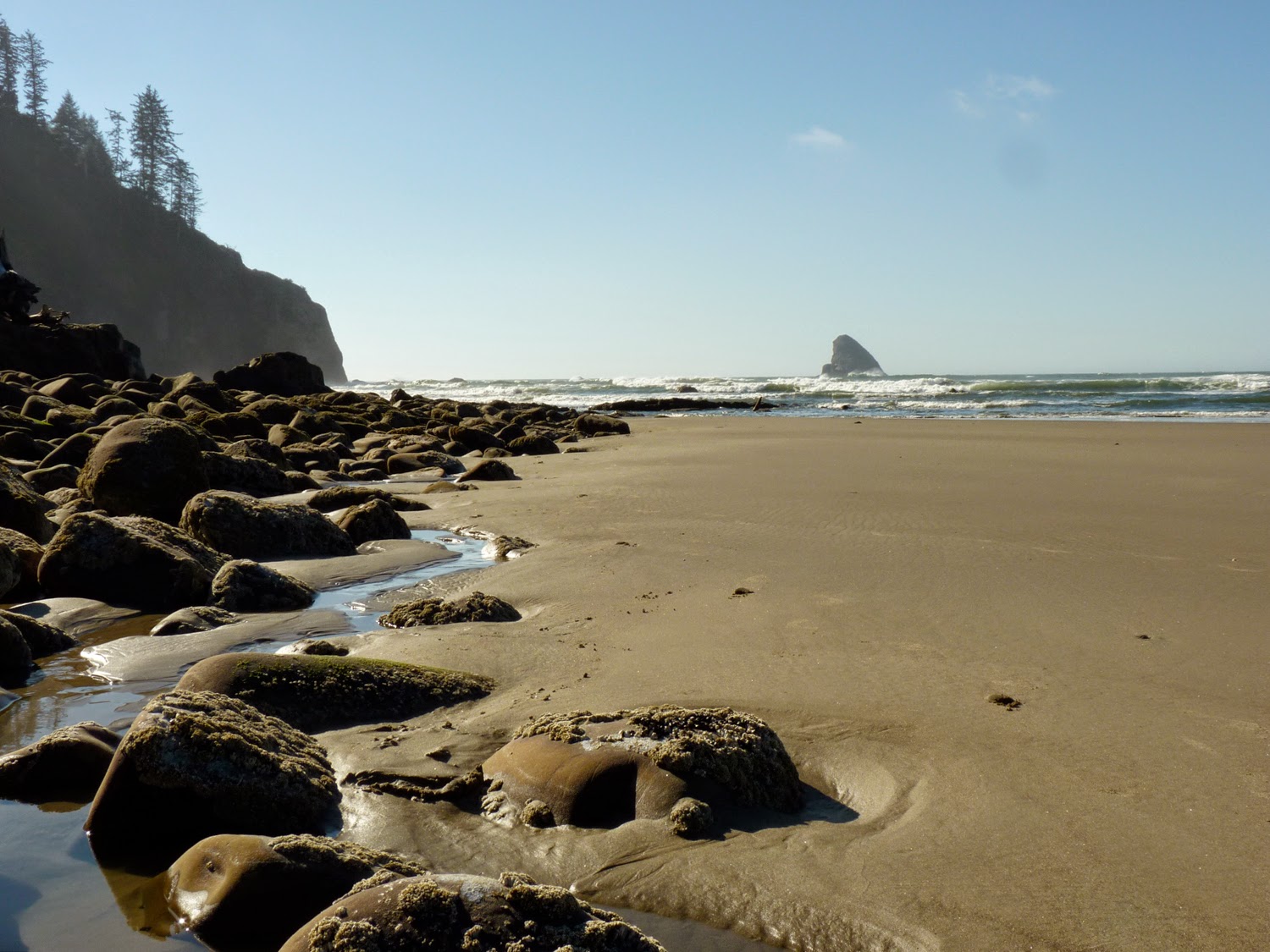 Nor, this setting when we rotated our heads to the left in a more southerly direction towards Cape Meares. 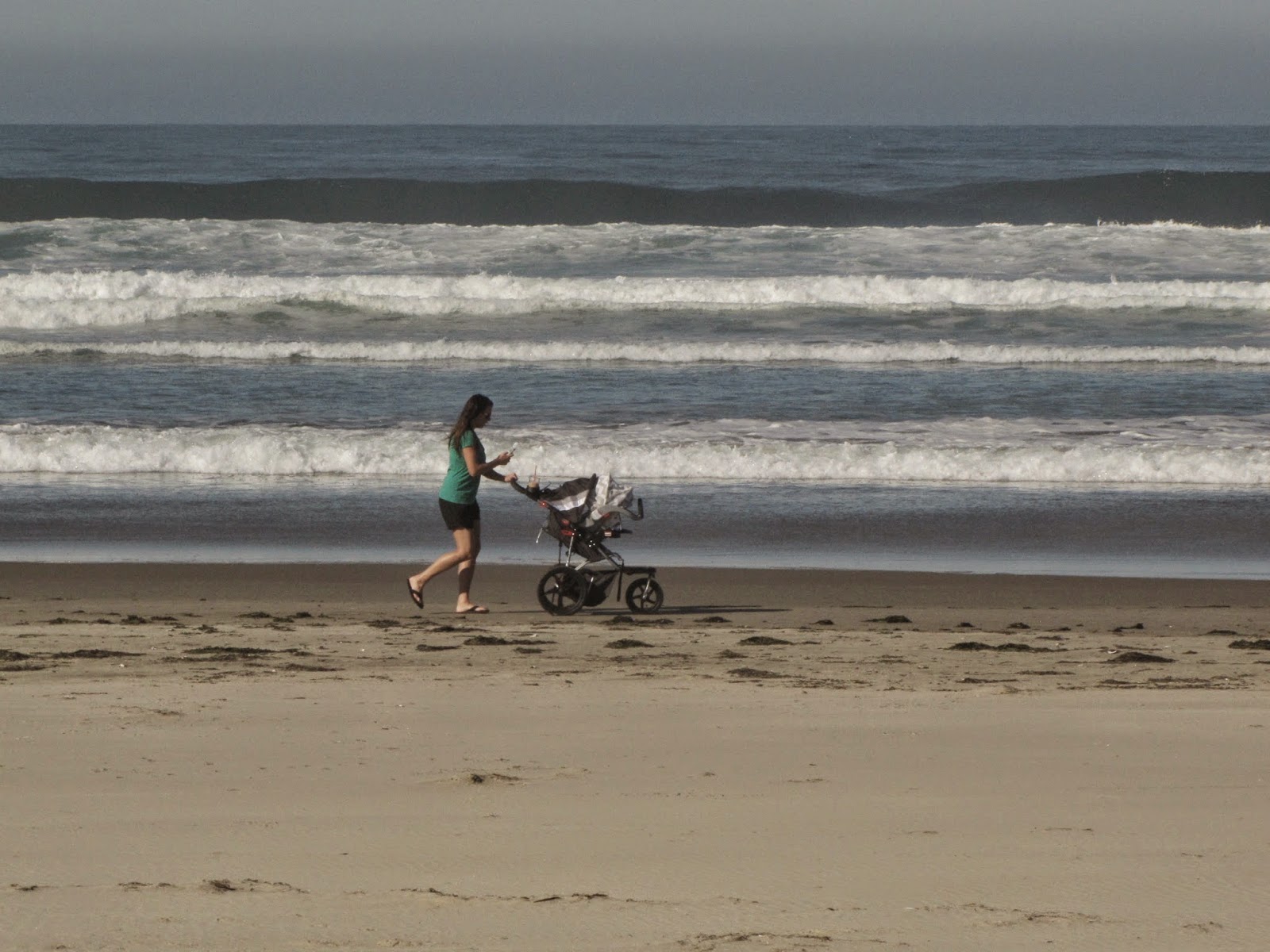 Technology meets nature meets aerobics:  The roar of the surf was no obstacle to keep this jogging mom from communicating.  Now I wonder if texting while running down a beach pushing a stroller qualifies as texting while driving?  Talk about multi-tasking talents. 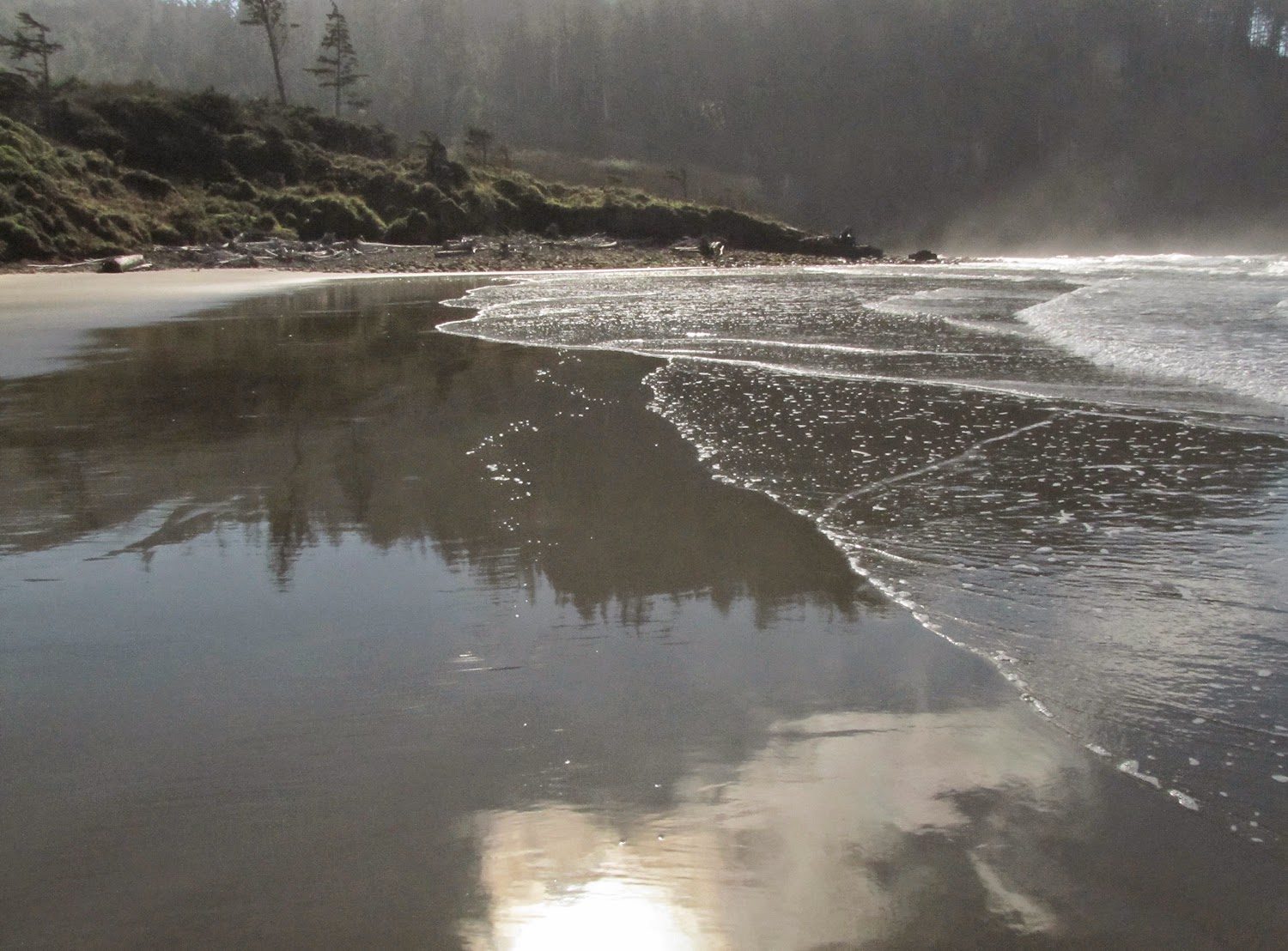 Further north down the beach , towards the Cape, sand dunes give way to an eroding rocky shoreline. 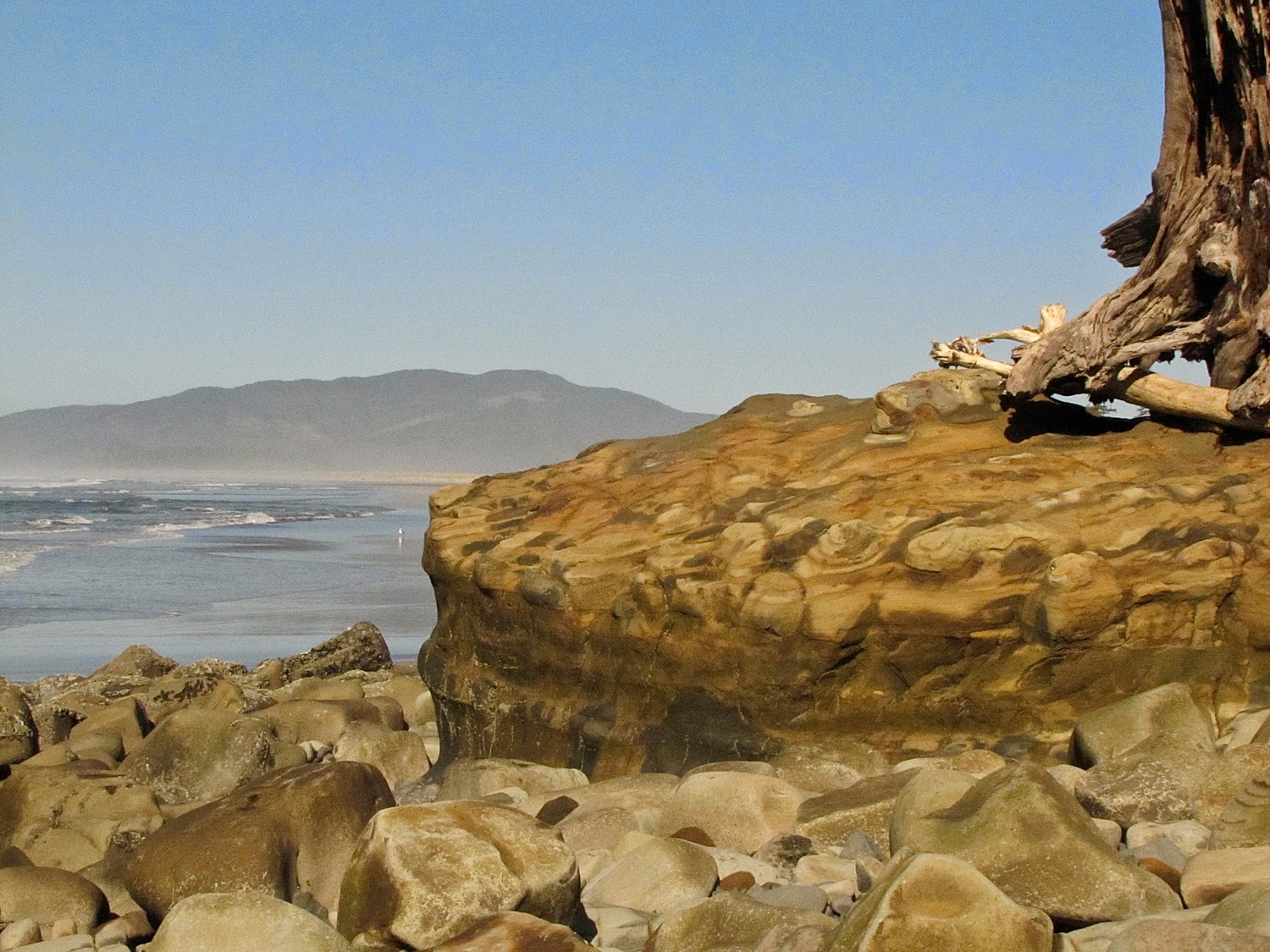 Upper reaches of the shoreline are strewn with wave sculpted rocks. 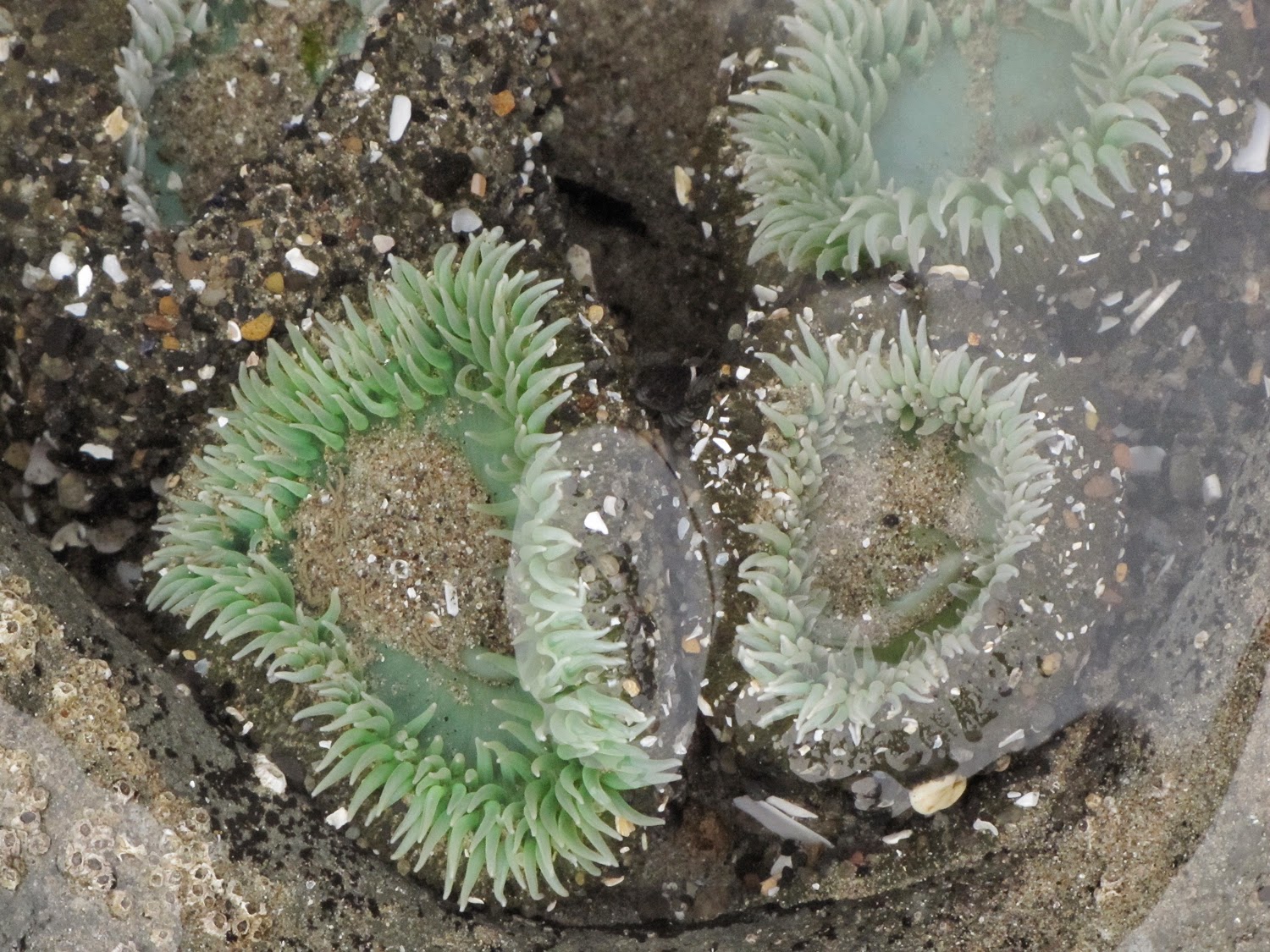 Rock outcrops that reached the water are colonized by an array of sea creatures such as these anemones.  A local resident told us that just a few months ago this area was totally covered in sand.  It's makes us wonder how these fragile creatures could survive being buried. 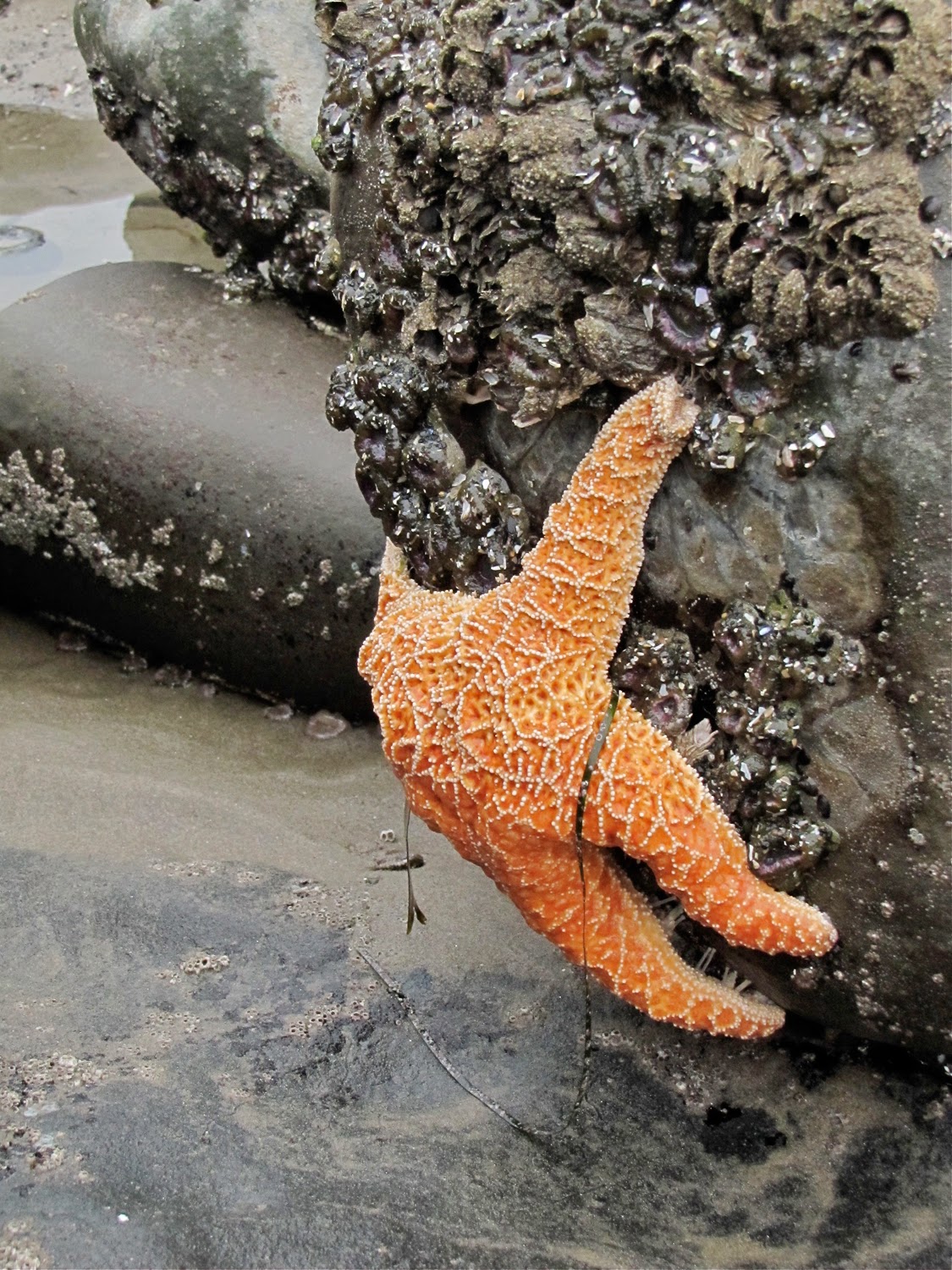 An ochre sea star demonstrates how to scale a more than vertical rock face.  Somehow I don't seem to have the same talents.  Nor could I suck a raw clam out of it's shell. 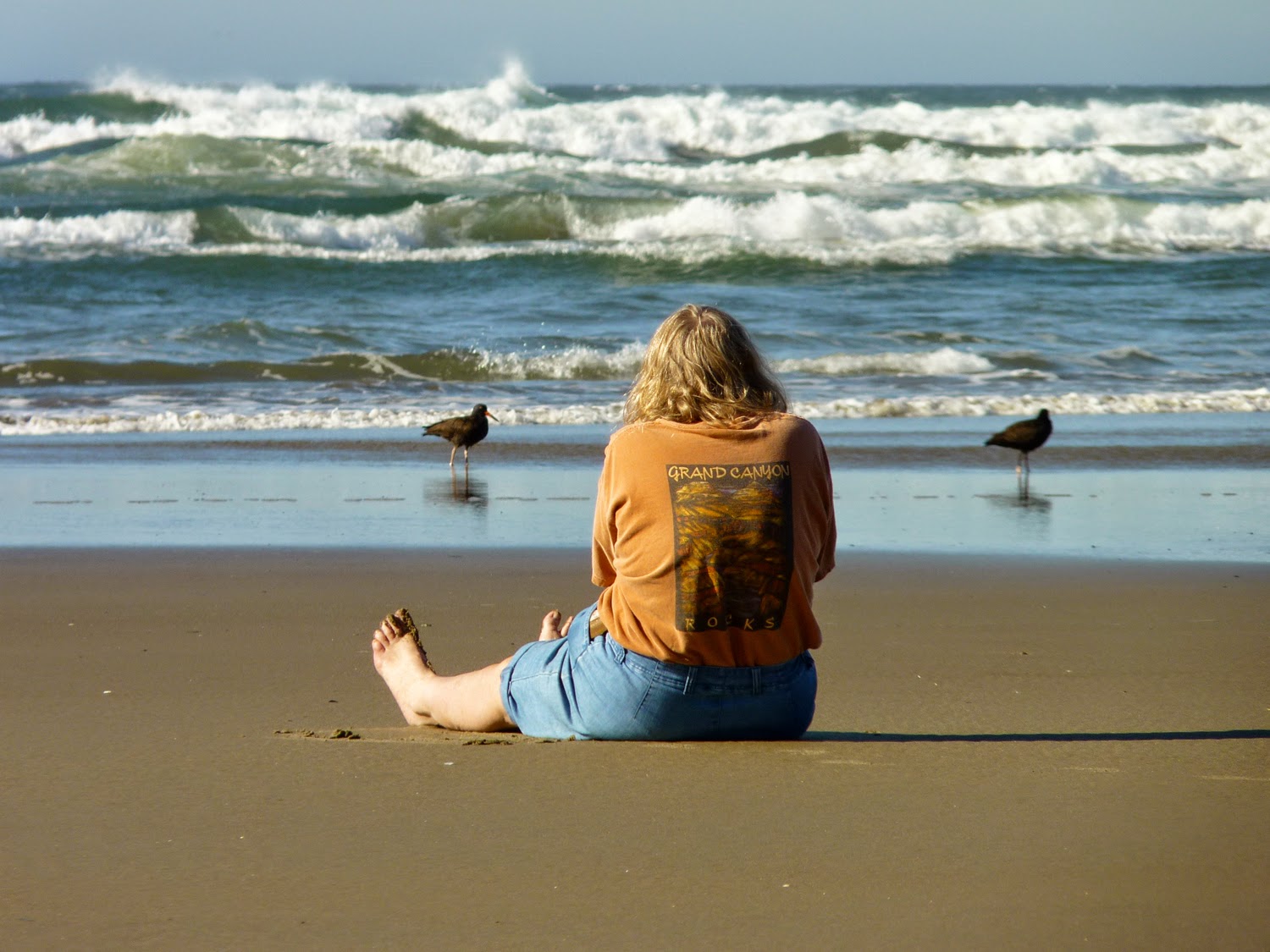 Karen getting a wet derriere. -- oh, and photographing a pair of black oystercatchers. 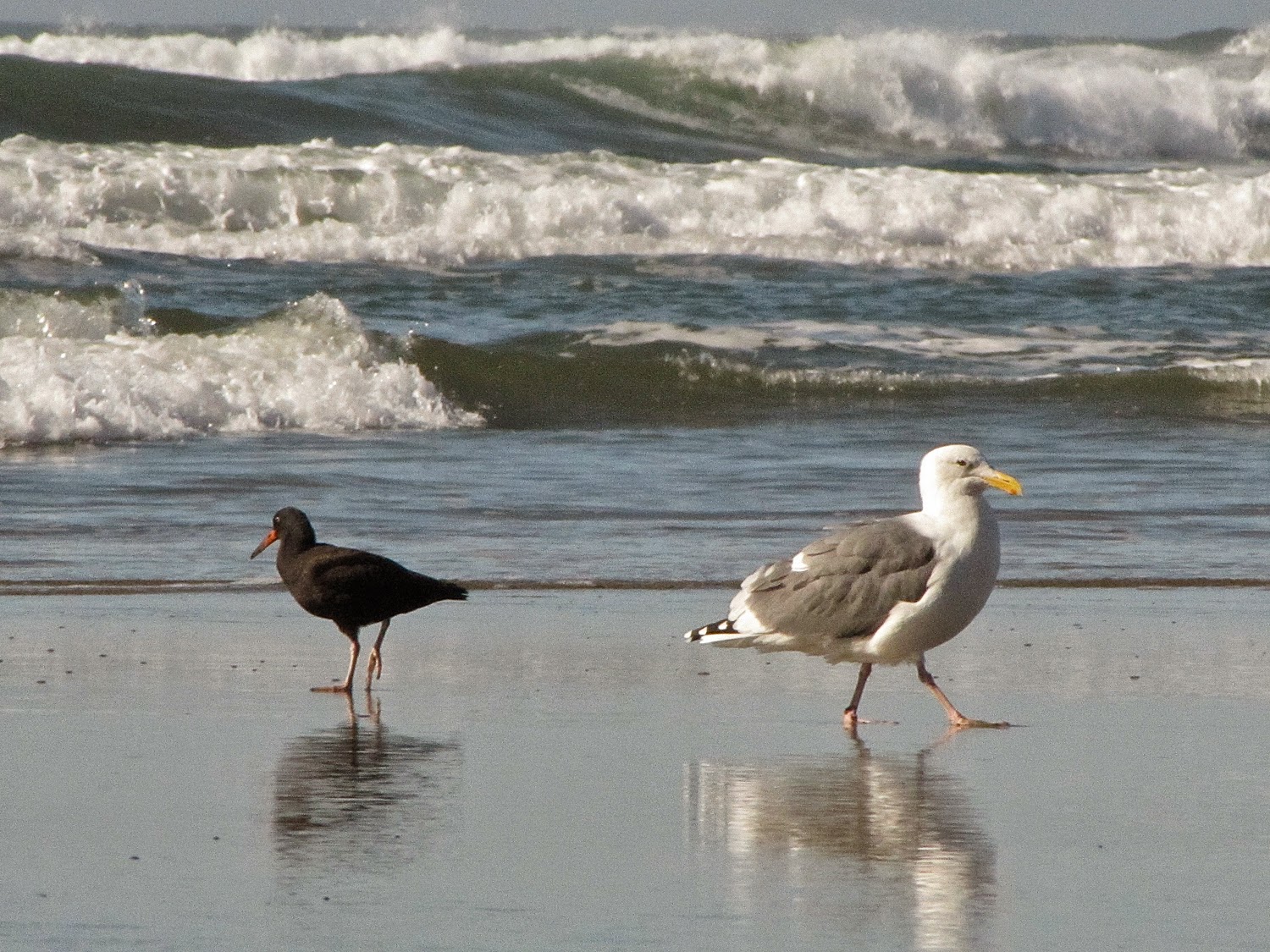 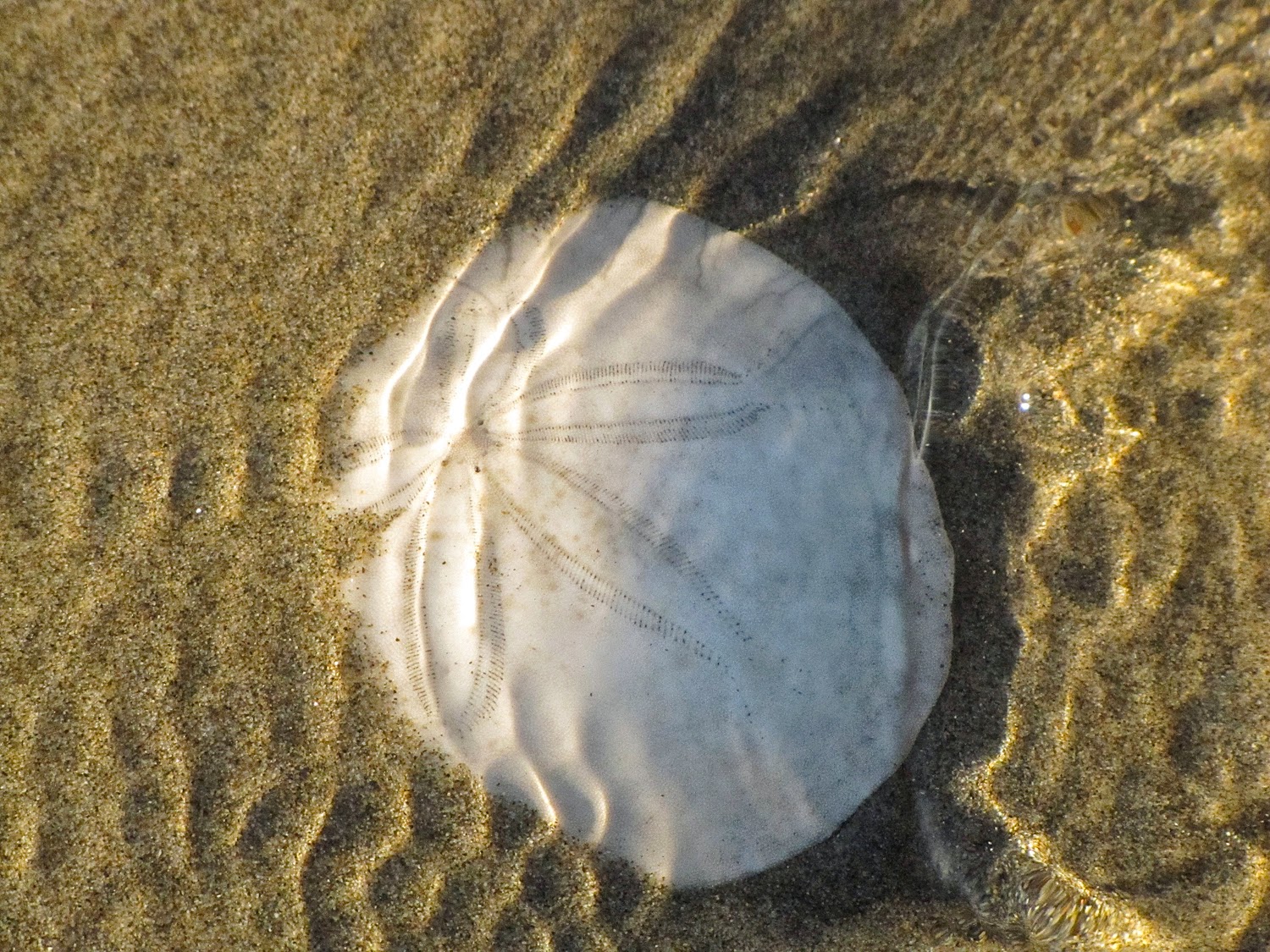 Every morning Karen raced down the beach hoping to beat the gulls to sand dollars as well as anything else that washed up during the night. 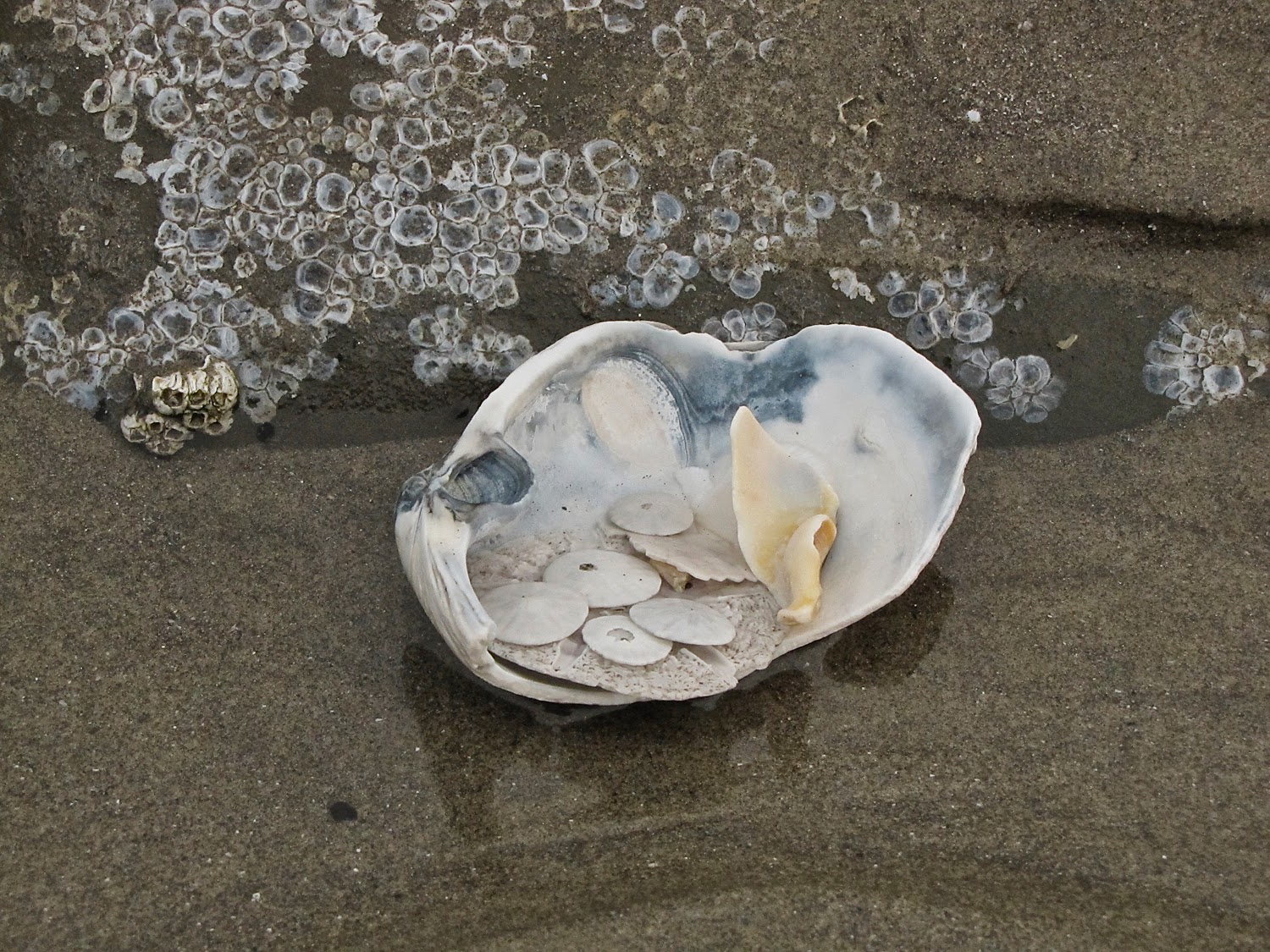 Some of Karen's treasures.  Note the holes in the tiny sand dollars where gulls had out-maneuvered Karen.  Are we to assume that gulls poke holes in sand dollars for recreation? 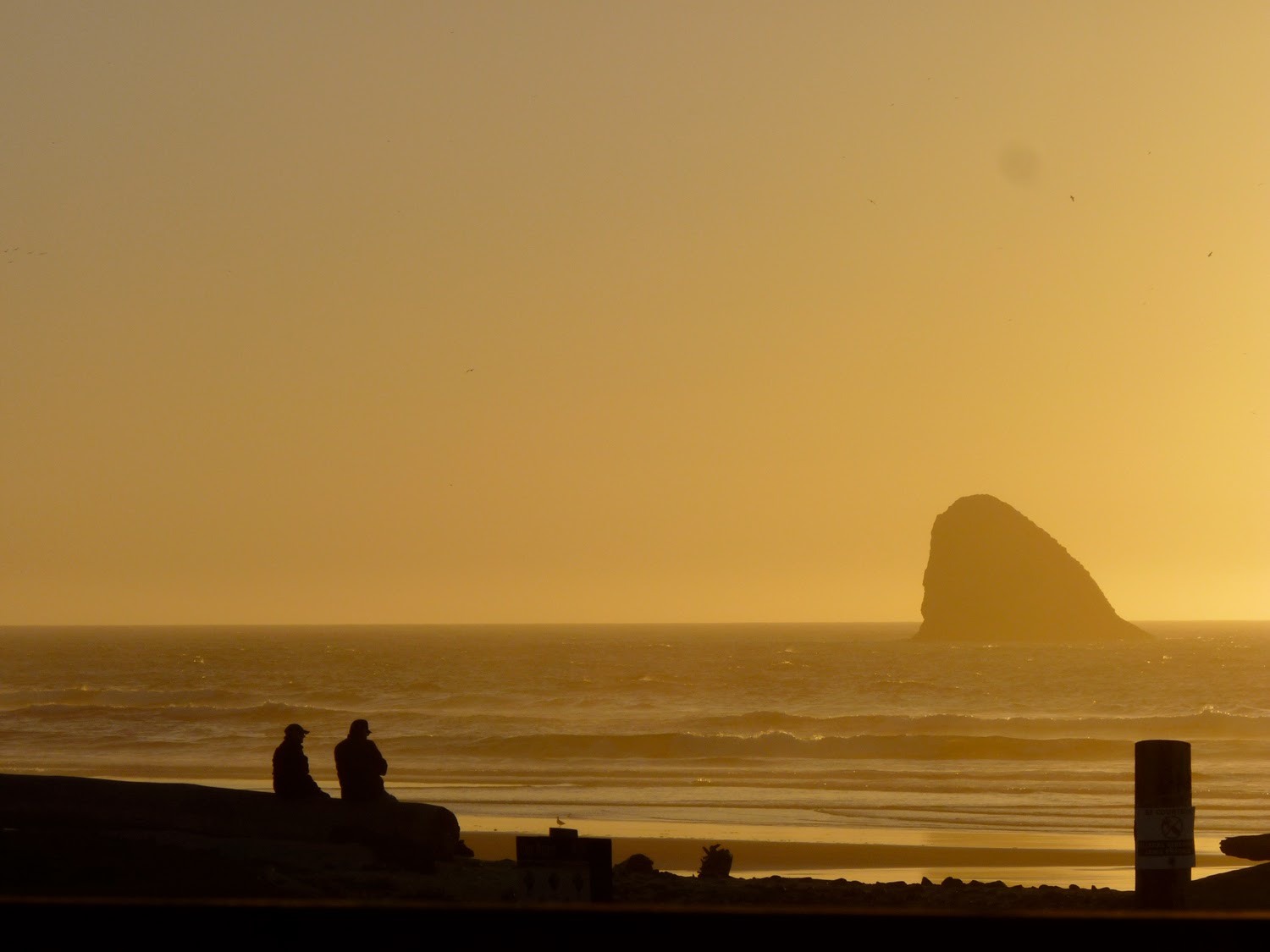 Sunset from our deck.  What a place to see the final edge of each day!  We eagerly anticipated the sun's return as the earth continued it's rotation.  Our next post will reveal what the "morrow" wrought.

Posted by Don and Karen Cornelius Artwork at 12:28 PM 2 comments: