At every opportunity, Niko (our now deceased four-footed companion) would mascerate any stick within reach like a video-game chain saw.  We figured Jaws, as we once nicknamed her, still clung to her wolf heritage -- seeing herself single handedly turning a vanquished caribou into a mound of butter.

Meanwhile, our grandson, Devon entered his tease phase.  Like Eve in an apple orchard, any creature with two, four or even eight legs was fair game as he gleefully attempted to bring it’s predatory instincts to the forefront.

Thus the results of any convergence of Niko with Devon were inevitable.  Devon’s expressions showed mischievious joy as Niko attempted to subdue whatever stick or item of clothing Devon wiggled within her eyesight.  In the end Niko usually emerged victorious.

The third leg of this convergence came when Tamia suggested she’d like a painting of Devon -- a subtle “I would like a painting... “  Thus for once Karen and I figured out what we should give Tamia and Cass for their wedding gift -- a painting based on a photo Karen took several years back.  Devon had climbed into the tangled branches of a willow thicket.  Niko, crouched below, was aglow with anticipation as Devon dangled  the requisite stick over her head.  Naturally. each time Niko leaped to grab the stick a delighted Devon retrieved it milliseconds ahead of Niko's gaping jaws.  Of course it was in the best interest of the stick because when Niko finally outmaneuvered Devon the result resembled Eve’s apple after two minutes in a Waring blender.

I finished the piece in a timely manner as I put the finishing brush strokes to the canvas the day before we headed north for the wedding.  Thus, Tamia and Cass received the gift wrapped in some folded cardboard.  OK, it  was still wet when I packed it and TSA would have torn the wrapping off anyway.  It wasn’t the fanciest wrapped gift they received, but at least it was something the newlyweds wanted. 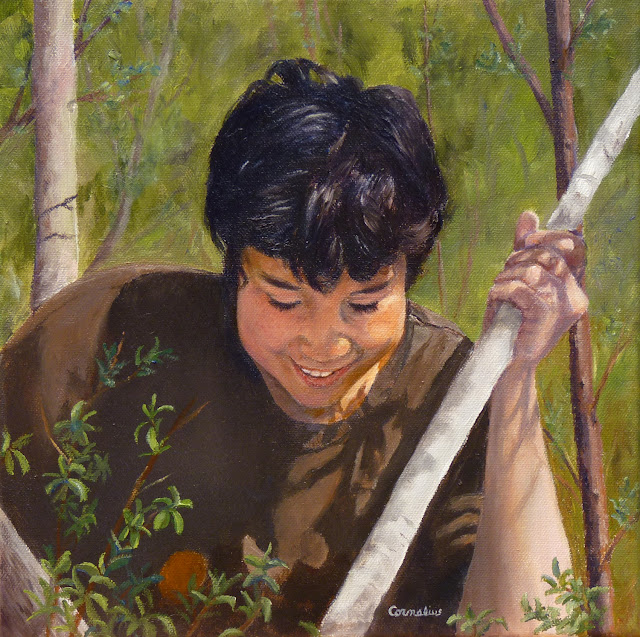 At last -- harvest time on top of our picnic table.  That’s where I planted Karen’s 33 carrot anniversary gift.  It’s been a bit of a learning process en route to the climax of this new endeavor for us.  And so, our knowledge base has increased on at least five fronts.

1.  Carrot seeds are really tiny so it’s easy to dump a whole bunch into a small hole in the ground.  Consequently, when they poke their cute little heads up, no matter how much you feel the life of every living thing on earth is sacred, you need to pull out all but one in each little spot where you want to see a big carrot emerge.  The alternative -- lots of micro-carrots.

2.  You have to round up a whole bunch of buckets of sand, muskeg and kelp to make dirt around here.

3.  A heavy raised container filled with enough of that dirt to plant an acre of Iowa corn pretty much takes up the top of a picnic table.  So, don’t plan on fine outdoor summer picnics if you want leisurely dining to occupy the same space as your garden.

4.  Don’t plan on eating all the carrots you grow, even if you position your carrot patch on top of your picnic table so deer can’t reach them.  Why?  Occasionally during winter months when deer that are foundering through deep snow longingly gaze at Karen with pleading brown eyes, a carrot or two has ended up bouncing off their heads as she hurls “flocks” of carrots out the window.  Just occasionally!

Thus, like the nine lepers who did not return to thank Jesus for healing them, those deer are unlikely to return to thank you for their winter sustenance.  Instead, since they’ve learned to relish organic carrots and they have legs they know how to use, you’ll find seats on your picnic table make an excellent launch pad for rogue deer.

5.  After you’ve discovered the cervidine theft and built a barricade roughly equivalent to the Great Wall of China around your surviving carrots, don’t harvest the survivors the next day especially when you’re about to take off on a road trip and there won’t be anyone around to eat them.

Karen and I will be discussing the virtues and possible negative aspects of gardening throughout the coming winter. 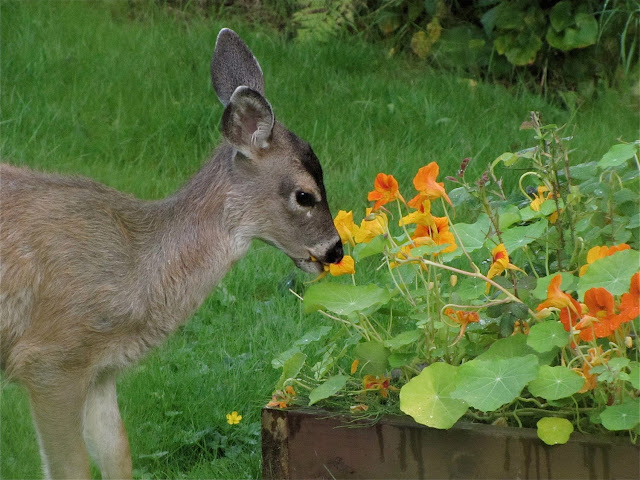 Karen's 33-carrot patch wasn't alone during the assault of the Cervidae.  Terry and Sandy's nasturtiums suffered a similar fate. 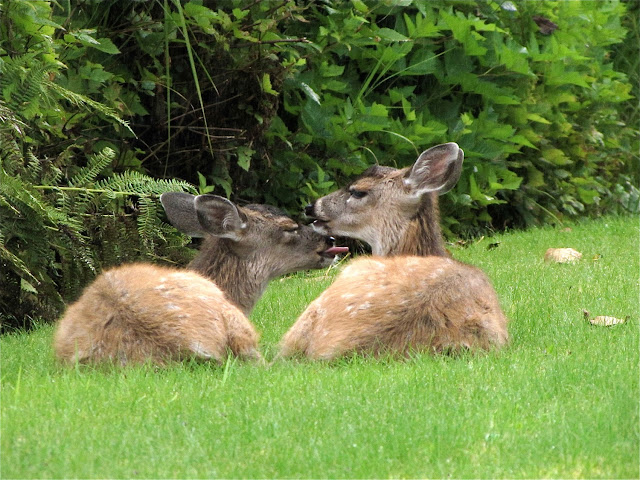 But, they're so cute. 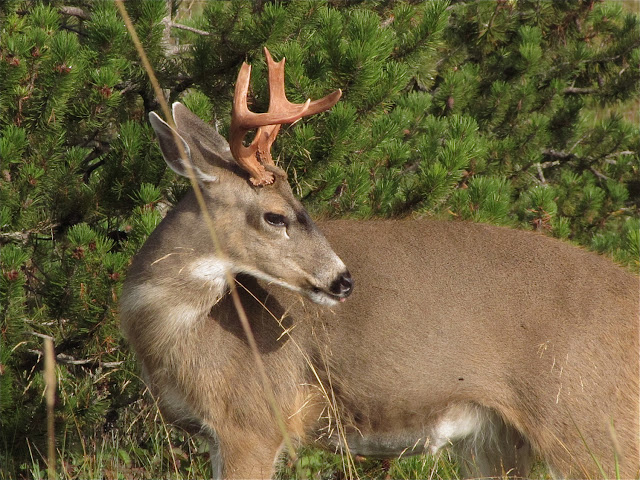 Or, in some instances, regal. 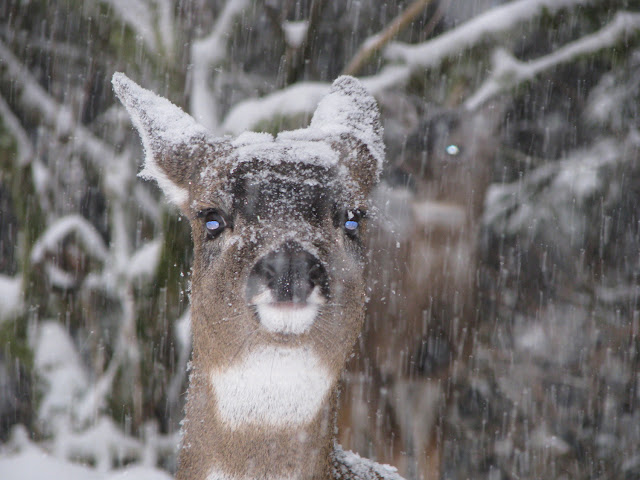 And those pleading eyes in winter.  They're more than Karen can endure. 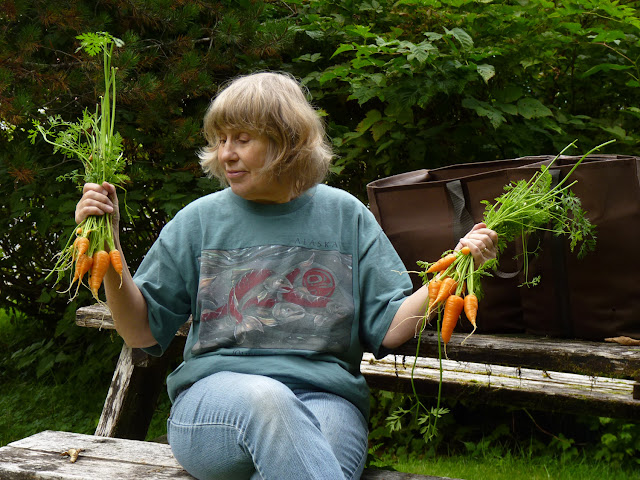 After hours of hard labor, Karen admires our winter's carrot supply.  Oh, but they taste so good!

Incidentally the only effort we’ve made to check on the status of our potatoes was when Karen yanked on one vast potato stem   Seeing just bare roots with a couple of swellings, she proclaimed failure.  I suggested that any potatoes might possibly have broken off from the roots -- that  the term dig potatoes is not without meaning.  We’ll see in mid October when we return from a road trip down to America.
Posted by Don and Karen Cornelius Artwork at 12:29 PM 3 comments:

This year’s Annabelle Baker Memorial Rainforest Festival Art Show themed “Creatures of Our Rainforest,” spurred Karen into a whirlwind of action -- less than a week before the big event.  It provided the perfect occasion to bring Karen's romantic side to the forefront.  How about a raven courting “party?  With the pressure on, Karen dove into her extensive collection of raven photos -- ravens hanging out at roadside pullouts in Jasper National Park, Alberta; ravens contemplating how to get under the lids of Petersburg boat harbor dumpsters; raven fledglings perched on driftwood logs on the shores of Wrangell Narrows -- begging for a remnant of a newly cleaned halibut carcass.  The images soon filled this computer screen as Karen searched for eager bachelor males and a coy raven "maiden.".

But where to put her “party.”  No, not atop a cannery roof whitewashed with the aftermath of gull and raven dinners or the back of a pick-up truck (where, like plundering Vikings, they often raid unattended grocery bags).  Yes, a lichen-covered branch.  Karen dashed off with her camera in search of the perfect tree limb.  Some luck, but she needed more.  Soon our deck was littered with branches and lichens.  The top of her desk, on which she paints, looked strikingly similar to the view of the hemlock branches out her studio window.  In fact, she could have just turned her chair around to find the perfect background.  Never mind, Karen was into her courtship painting and having fun.

Dinners were late.  OK, I must admit, Karen’s the family culinary provider.  In exchange I share kitchen duties figuring five minutes cleaning dishes is fair trade for her hour or two preparing a meal appropriate for a visiting dignitary.  So, dinners were late and when the deadline for entries in the show showed up, Karen’s ravens were only sitting on a branch that looked like it had been plucked from the sea after losing a battle with hurricane Sandy.  However, this is Petersburg where deadlines aren’t necessarily deceased.  Thus Karen delivered her completed painting, “Courtship,” hours before the show was hung.

I sure hope it doesn’t sell.  I’d prefer to see it adorning one of our living room walls. 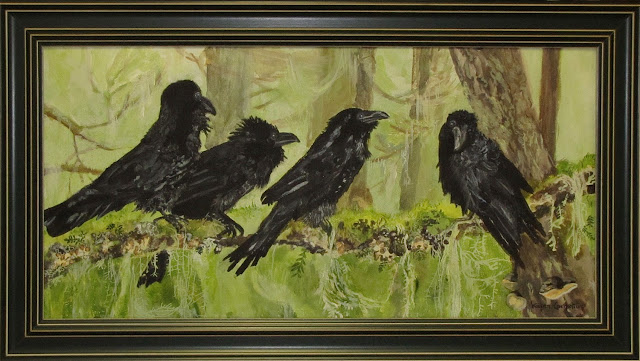