It began with a beat up, not-quite antique bread box — yet another one of Karen’s multitude of Salvation Army Thrift Store “eureka discoveries.”  She lugged it home.

“Don, could you convert this into a squirrel feeder?” 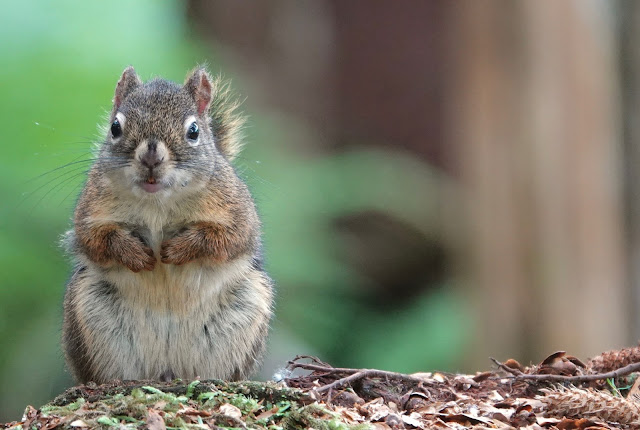 Karen finds red squirrels, in fact any rodents for that matter, irresistible.

Karen has been feeding birds, and consequently red squirrels, on our deck for years with constant revisions to the theme.  This, she hoped, would be her finest addition even though it lacked one thing -- any semblance of esthetics.

And so Karen's dream languished for several years until one day a strange phenomenon struck.  My motivation to make it real.  I’m not sure what sparked my action but I’m guessing it was her 147th “suggestion.”

The wide ledge outside our kitchen nook where we had meals, made the perfect setting — OK, it’s just a board, but the bread box fit on it.  Soon, with it's only semi-attractive feature, the door, removed, so she could push it against the window, I divided the bread box into two floors, drilled holes at each end, spruced it up with a paint job and viola, we had our own version of a National Geographic TV show directly in front of our kitchen table. 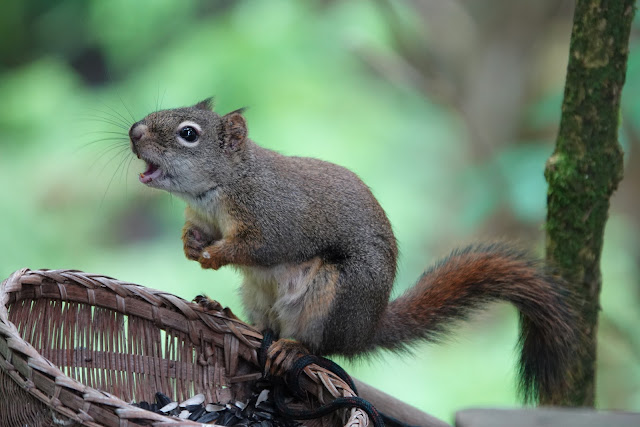 With zero sense of appreciation for all the free handouts, Ms squirrel scolds Karen for daring to intrude on her deck.

The almost daily routine — dump a couple of handfuls of peanuts in the feeder and watch the action.  Often it involved territorial disputes between warring red squirrels or invasions by Steller’s jays and crows who would warily stretch their necks as far as they could into the box to snatch a peanut. 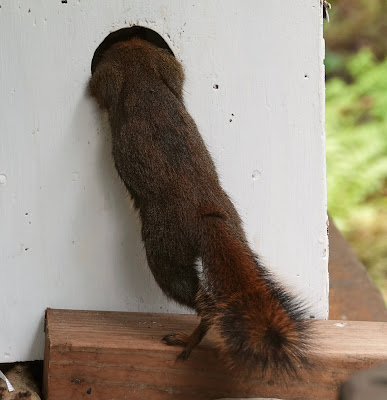 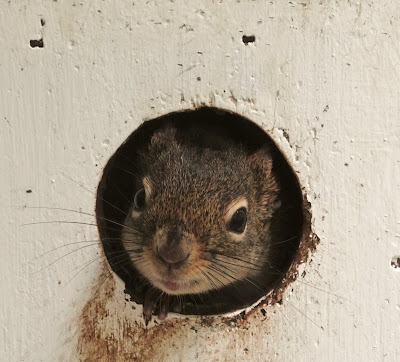 "Guess it's OK.  Don't mean to complain but it's not a great construction job."

Thus began the spring of 2020.  A sweet lass of a red squirrel, one of the babies from last year (there’s alway a new family every spring) frequented the bread box feeder.  Karen, as she does every spring, filled various containers on our deck with dog hair for nesting squirrels or birds.  Sure enough this squirrel started packing it off — probably enough to make a pair of socks for every Petersburg resident willing to don a pair of socks knitted by a squirrel.

Karen even baked cookies in exchange for dog hair from willing dog owners.  Note to dog owners who supplied hair but did not receive cookies: Remind Karen she owes you because I always steal some when she’s not looking.  We also noticed prominent nipples on her belly (the squirrel, not Karen), a sure sign she had a family secreted somewhere nearby. 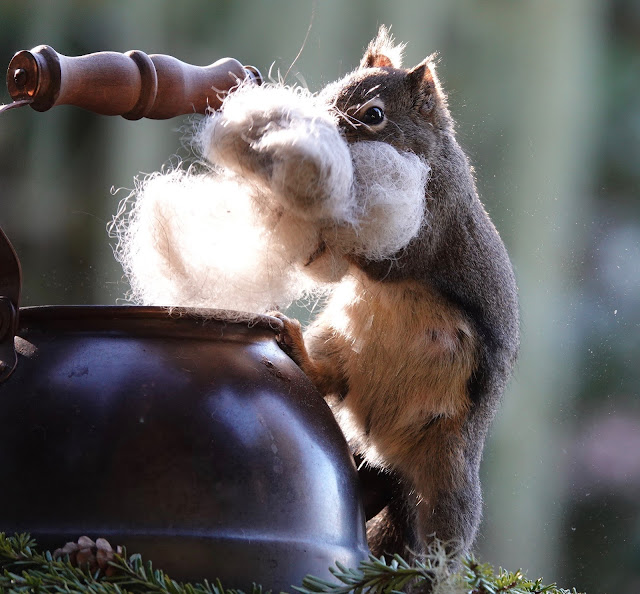 "Sure glad they brushed Molly today." 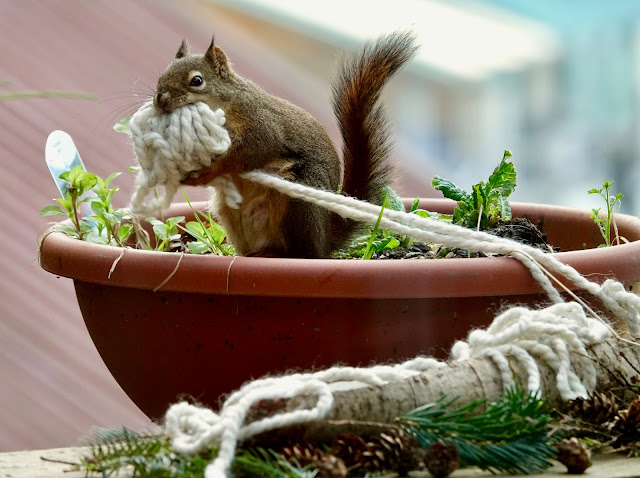 "Cause when Karen runs out of dog hair she has to dig into her yarn collection to find a substitute."

Eventually we spotted two babies (squirrels, not humans) chasing one another around a nearby tree.  As the days wore on mama squirrel seemed to want to get away from her new brood more and more. 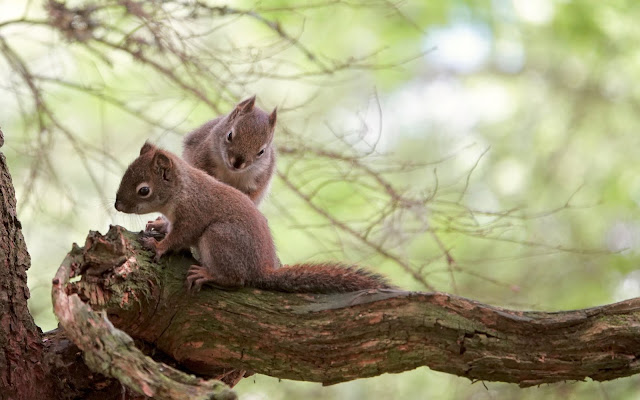 The babies -- about the only time red squirrels tolerate one another.

Then, one day — she did.  Instead of the bread box feeder being empty, it had accumulated more peanuts than Karen put in it.  A lot more.  And grass.  And sunflower seeds from other bird feeders.  And dog hair.  Our feeder had morphed into a squirrel cache. 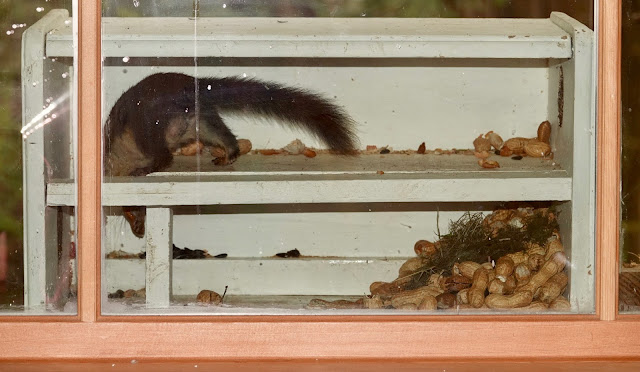 Oh oh, things have changed in the feeder. 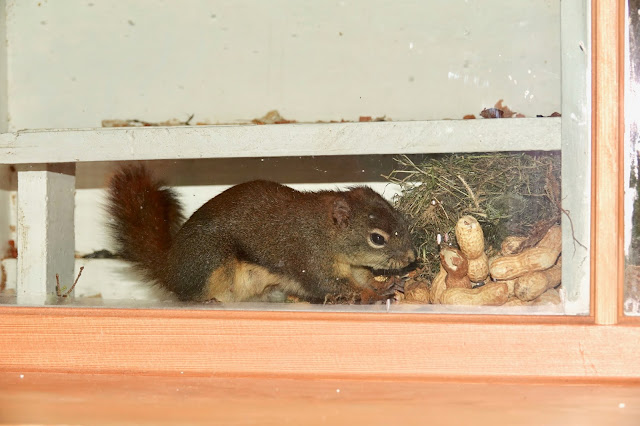 At least she's being neat.

Initially Ms squirrel meticulously filled her larder, carefully placing each item, sometimes even rearranging the nuts and often sweeping the floor of the feeder with her feet.  She even separated highly treasured walnuts from the peanuts in a different corner of the feeder — now storage unit.  Eventually she filled the first level completely.  Time to tackle the second floor. 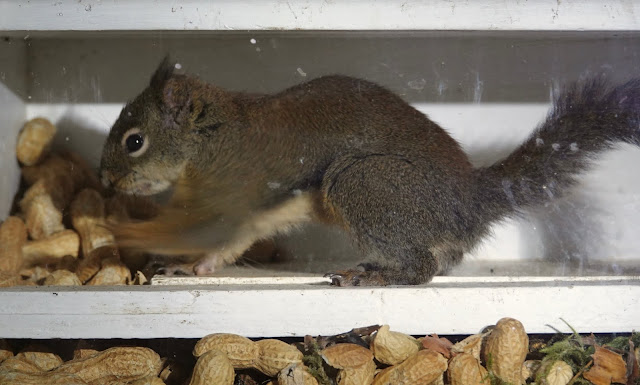 Guess I'll start in this corner.

As the second floor filled tidiness gave way, at least in our eyes, to clutter.  With no room on the floor to sweep, she stopped.  Peanuts overflowed the second floor through a space between the feeder and our kitchen window.  And they now combined with clumps of dog hair, grass, and wet sunflower seeds that looked like — no, I’d better not say.  Suffice to say you won’t see it on the cover of a gourmet cooking magazine.

Karen finds it considerably less than appetizing as we sit down for dinner and desperately wants to clean up mama squirrel’s cache.  Then I remind her that squirrels have a different set of values than she does (not so much her husband) and if we want to see nature in action this winter (do peanuts, dog hair and sunflower seeds count as nature?) — well, we should be patient.

I'm not sure why Karen doesn't want to look at this piece of abstract art while she eats.  Maybe it's because we can't clean the outside window in front of it so she gets a better view?  Yeah, that's it.

It is now impossible for mama squirrel to add more peanuts without the overflowing additions providing morsels for crows and jays.  So Karen constructed a barrier of chunks of bark to block the entrance while providing a hole for mama squirrel to sneak through.  It works — if you don’t factor in the new “alarm clock” Karen created.  You see, every morning at first light (remember we’re at a northern latitude where that’s about 10 minutes after we went to bed) one jay has decided it is going to peck, and peck, and peck (did I mention peck?) down that barrier.  And this entire contraption is right below our bedroom window.  And I’m a light sleeper.  And that peck sounds more like the jay has evolved into a pileated woodpecker drilling a hole into a hollow log. 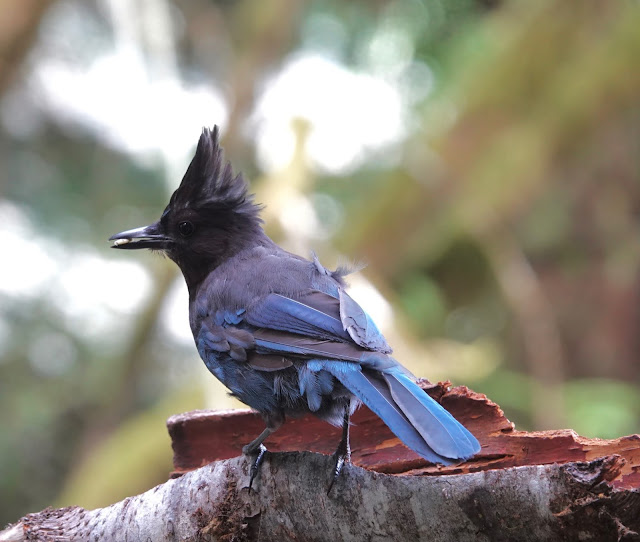 Gregory Peck, the Steller's jay who wakes me up at dawns early light.

However, since this is the year where we’re going “nutty” being grounded by the coronavirus, we should be thankful for a squirrel that is providing us with this distraction.  Not so much the jay.

I sure hope Karen bakes some more of those thank you for the dog hair cookies. 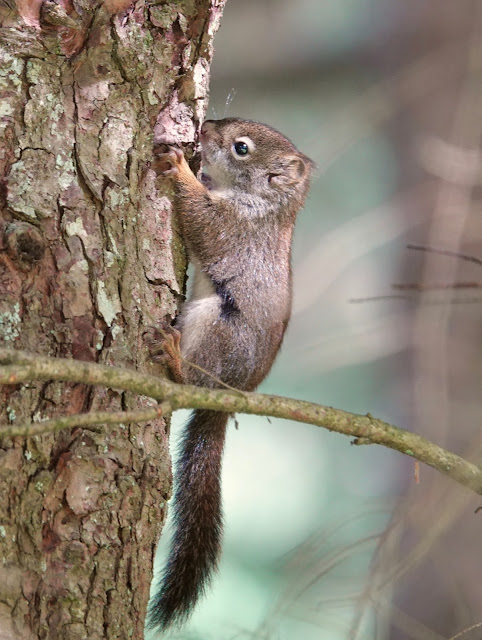 Guess we'd better leave you with an endearing image of a red squirrel instead of a jay or soggy peanuts.  So here's the next generation learning to climb a tree.

Posted by Don and Karen Cornelius Artwork at 12:04 PM 9 comments: