The Wilds of Alaska in Our Back Yard

One of Karen and my favorite places around Petersburg bears a name that conjures up the mystique of Alaska.  Just voicing it bring sromantic images into anyones psyches — mountain majesty, wild rivers, wilderness, lonesome valleys, megafauna such as bears, wolverines and bald eagles.  Yet, it’s only about three miles from our front door as measured by rotations of our bicycle tires.  Yes, it’s City Creek -- a name that just grabs you and says I have to see it.  Maybe you should.  There you’ll often find Karen during the waning days of summer. 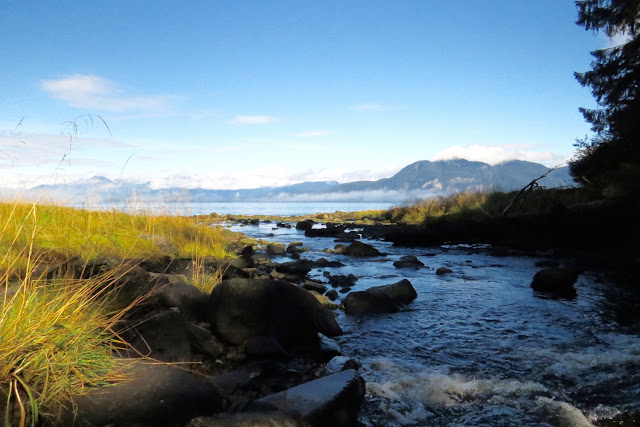 The last gasp of City Creek before it enters Frederick Sound

City Creek is a short watershed interrupted halfway through by a dam backing up a lake that provides a safety-net water source for Petersburg.  When I say lake, don’t think sandy beaches, and marinas full of happy fishermen hoisting creels sagging with the weight of record-size trout.  I use the term lake loosely because if you hike up to it you risk disappointment.  Think shallow pond decorated with the floating and standing remains of a drowned forest for much of it’s shoreline.

Above the reservoir City Creek drains a wild, rugged valley.  I once descended the ridge above it thinking it would provide a pleasant short-cut back to town.  NO!  Large tracts of overgrown wind-throw (huge old-growth trees laying on their side blocked my path.  If you’re envisioning a log such as you’d see in a saw mill, once again you’re wrong.  These trees still have their limbs providing a maze of now vertical branches to wiggle between as you climb up and over the log.  The challenge in getting to the next log — more than head-high devils club fills the gaps between them.  It’s scientific name, Oplopanax horridus, gives you the idea since the plant comes adorned with needle-like spikes — even on the leaves.  What a fun hike!

Finally, below the lake, City Creek cuts it’s “trail” through gentle muskeg and forest uplands until it crosses Frederick Point Road (our most frequent access point).  From there, it’s a quick jaunt to it’s intertidal outlet.

So, why is this creek a favorite spot on our island?   Consider these photos Karen took during the past couple of weeks. 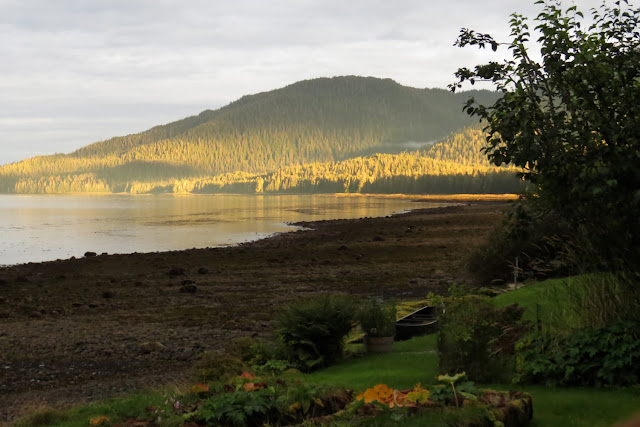 The Frederick Sound shoreline from Petersburg.  City Creek enters the Sound in just about the middle of this photo. 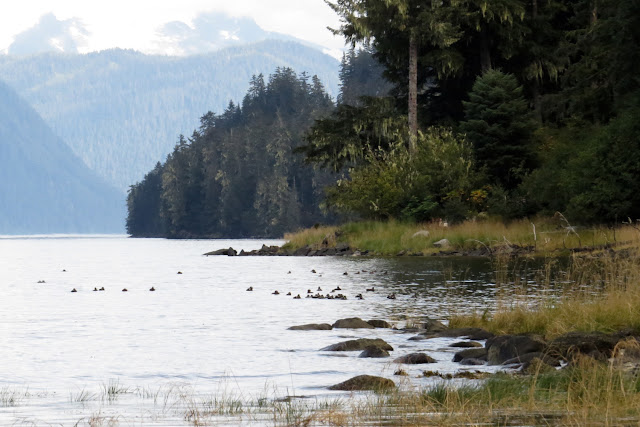 Waterfowl feed at the outlet of City Creek at high tide. 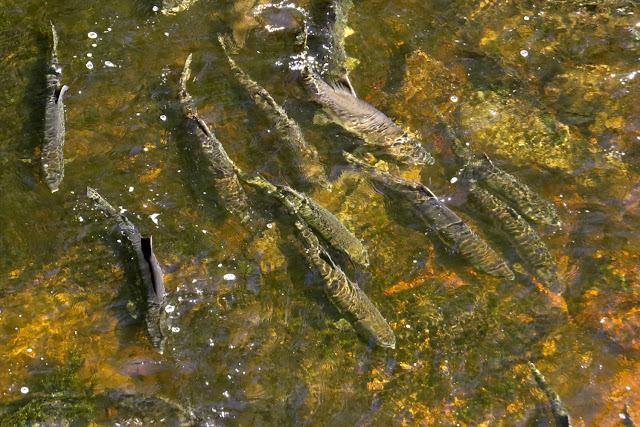 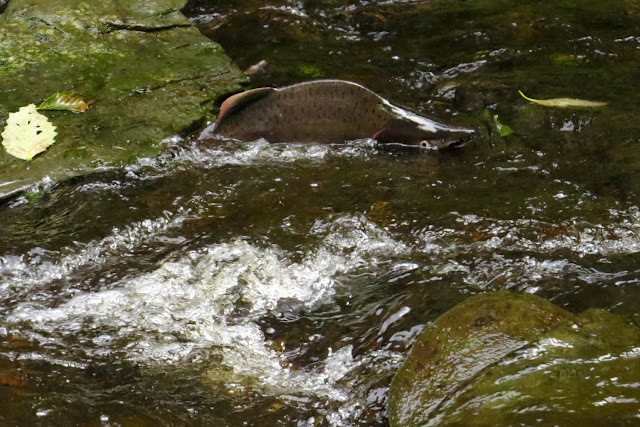 A male humpback salmon shows why they bear that name.  Only a female humpy (as they're affectionately know here) could think they're cute. 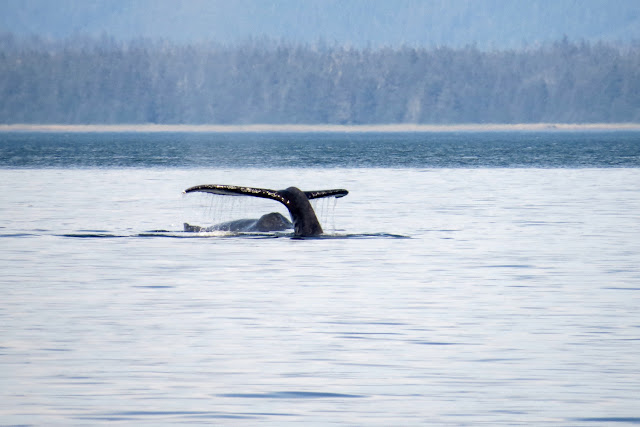 Don't confuse humpback salmon with the other humpback creature Karen photographed off the mouth of City Creek -- Humpback whales.  They look a little different. 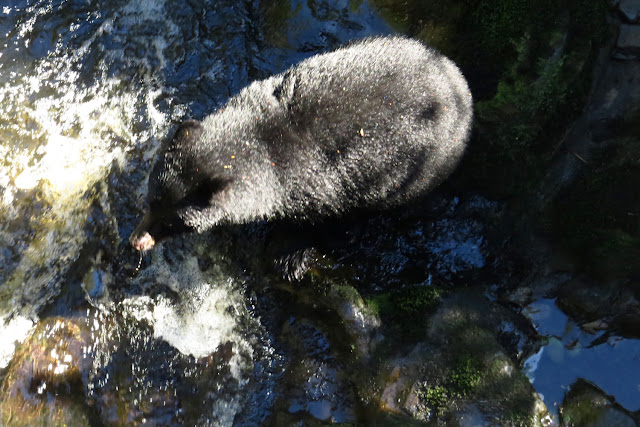 During one outing as Karen zoomed in on a pink salmon below the bridge, all of a sudden the viewfinder turned black.  Oops.  She doesn't think the bear even saw her. 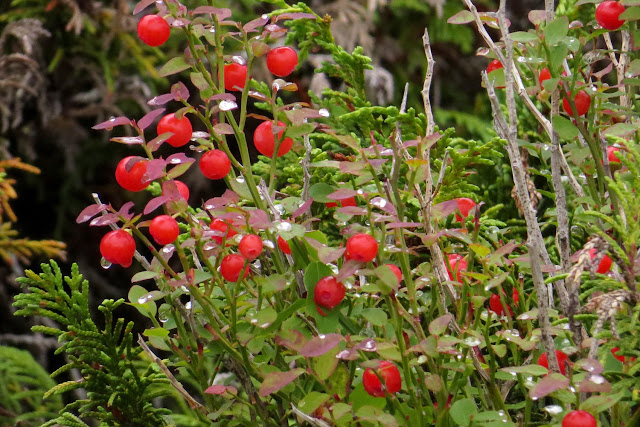 Somehow the black bear missed this patch of red huckleberries on it's way down to the Creek.  Karen didn't. 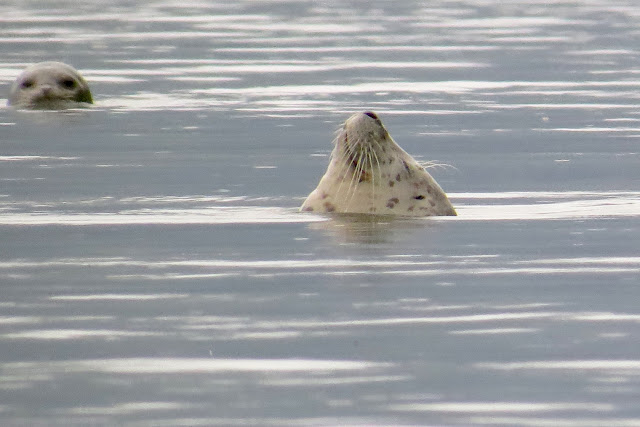 You know when the salmon are schooling off City Creek when the predators show up -- in this case a smiling harbor seal. 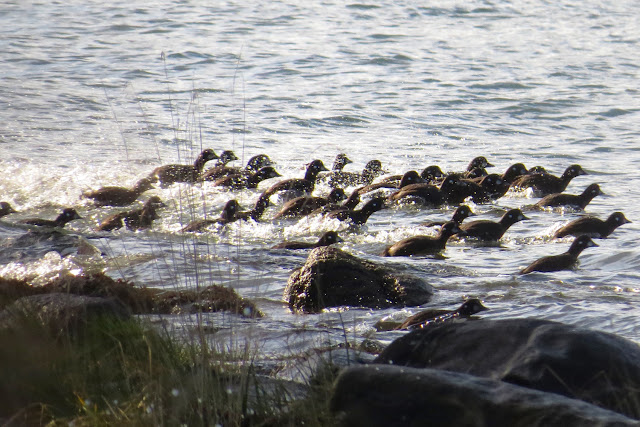 Bird life also attracts Karen to the creek -- in this case a flock of molting and immature harlequin ducks that Karen snuck up on without them noticing.  Well, almost not noticing. 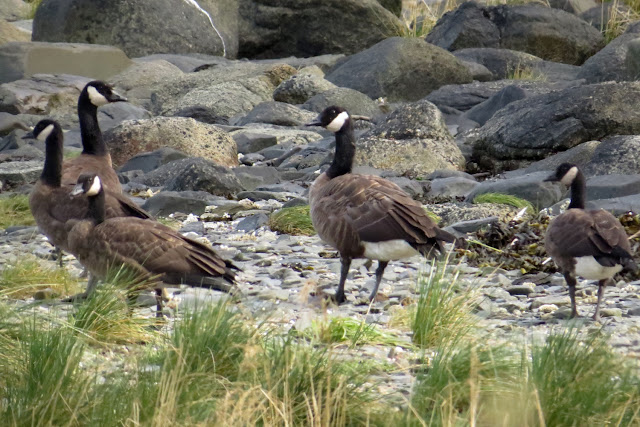 She was more successful with this flock of Vancouver Canada geese.

Karen doesn't even need to find salmon, waterfowl or mammals, to discover photo subjects.  Consider these variations on an alder leaf theme. 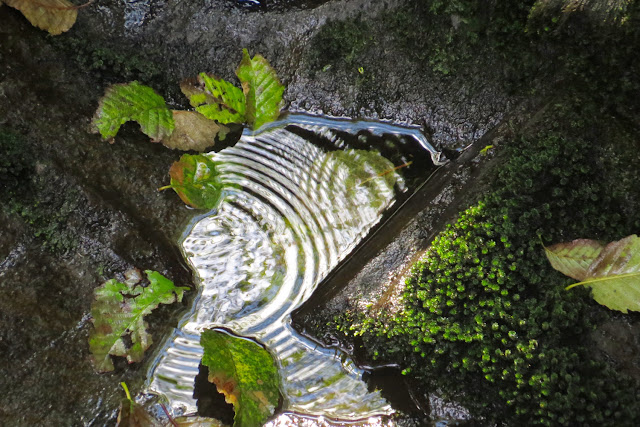 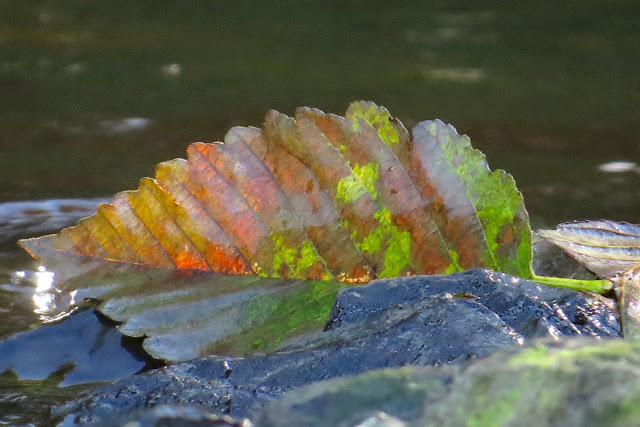 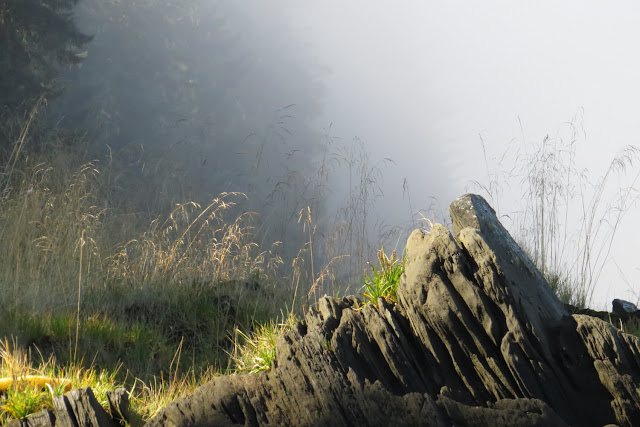 Even a foggy day excites Karen, especially when she's on the edge of it. 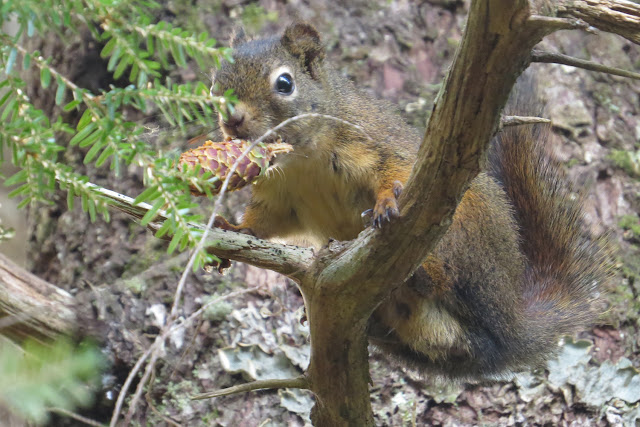 No outing would be fully successful for Karen without an encounter with a rodent.  In this instance she found herself bombarded with spruce cones.   What in the world?  Looking up she discovered her attacker -- a red squirrel.

Oh oh, this blog has exceeded my self-imposed length limits.  There are so many more photos to share, but I think it's time to go. 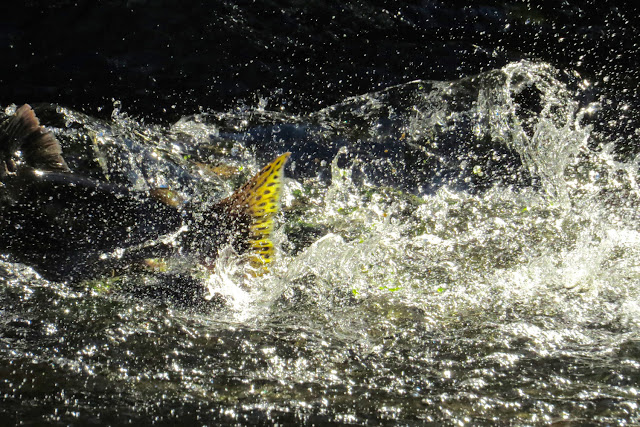 Posted by Don and Karen Cornelius Artwork at 12:48 PM 2 comments:

After I painted McKenzie and Parker’s cousin, Anna Page, my “instructions” were clear.  I could not show bias.  After all, this is family.  Thus I “dove into” two portraits this past winter.
The photos of both girls appeared to have been taken with a flash, but McKenzie’s image still showed her color and facial features.  My guess is the girls were in a restaurant with Parker’s arm around her younger sister.  It must have been winter because Parker had a glove on.  After gently extricating Parker’s arm I had fun getting to “know” McKenzie although the request came with one caveat.  Change her clothes.  The pink sweater came in another photo. I just had to be careful not to embarrass McKenzie as I executed her wardrobe change. 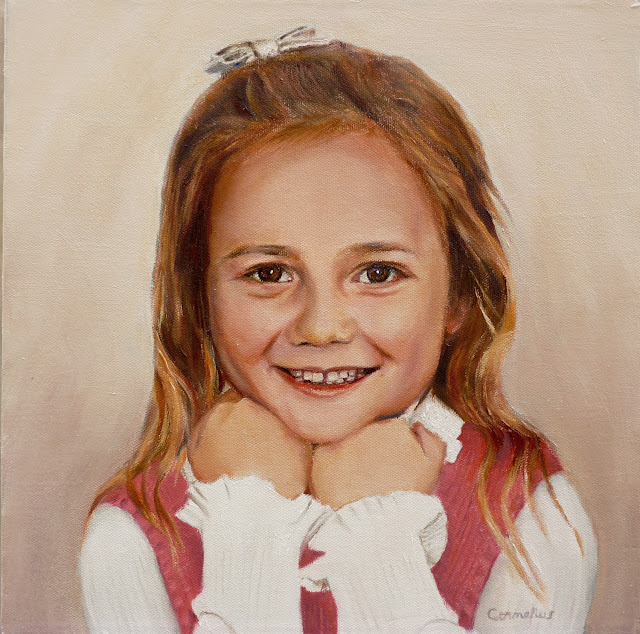 Parker proved to be a greater challenge.  Her grandma sent me the image because it was her favorite photo of her granddaughter.  It was the hat — thus the title, “Parker’s Hat.”  Now, I hate to be critical, but my biased analysis suggests the image I received was a photograph taken with an iPhone of an already printed photograph, then sent to me via email.  Yikes!  I said no.  Then, one day, feeling totally uninspired I sat down in front of my easel and stared at Parker.

Surely I was enough of an artist to be able to convert her yellowed lightly featured face into a portrait worthy of being hung in the Smithsonian.  After all, Parker is pretty appealing.  I’d just play with the hat.  Now, being one who feels that a moment spent on a painting cannot be wasted, I felt committed.  Yes, I convinced myself, I could do it.  I tried every conversion and manipulation of her facial features I could figure out how to do on Photoshop, but still she looked like a somewhat jaundiced model.  I think I painted Parker’s face six or seven times, but finally decided, if I can’t see it, I can’t paint it — unless it’s an abstraction.  I just quit and mailed it off.  Parker’s grandma says she loves it.  She did have a good summer tan after all. 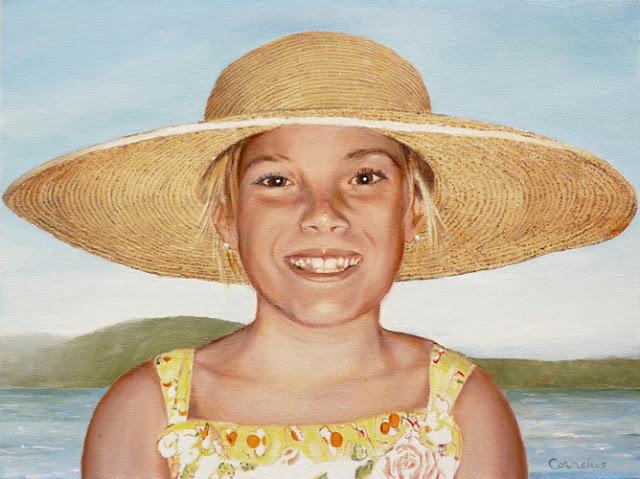 Posted by Don and Karen Cornelius Artwork at 12:13 PM No comments: