My Lord, What a Morning

It didn’t really start this morning — more like a month ago.  The phone.  “Karen, would you be willing to read the scriptures at Church one weekend in June?”

Now, at Petersburg Lutheran Church the honor comes with a bonus, you’re also the Communion Assistant, but we’ll get to that later.

Before Church Karen attends Sunday School (held at Colleen’s home next to the church) with a flock of her feminine friends, one of whom, Sally, offered Karen a ride.  Not wanting to delay Sally, Karen stood in front of our house ten minutes early.  Never one famous for her patience, nine minutes later Karen decided she had been forgotten and scuttled off on foot.

Thus, when Sally knocked on our door perhaps a minute or two late Karen had disappeared out of sight.  Off Sally drove figuring she’s pick Karen up along the route.  No Karen.  Fearing she may have fallen into a ditch, a most distressed Sally soon arrived at Sunday School, a distress she conveyed to Karen.  Minutes later with Karen now feeling remorseful and a bit rattled for causing Sally to worry, Susan set her cup of coffee down next to Karen as Karen removed her sweater.  Alas, a law of physics prevailed.  Two objects cannot occupy the same space simultaneously, namely Karen’s fast-moving hand and the coffee cup.  Yes, the coffee ended up all over Karen’s pants and the floor.

With only les femmes present Colleen suggested they had time to wash the pants during the Sunday School lesson.  Off they came and into the laundry room where Karen grabbed stain remover with which she doused her pants.  Editors note:  It might have been best if Karen had not removed her glasses when she took off her sweater.  After spraying the coffee stains she realized the bottle of Shout Out for Clothes was still on the shelf.  For the record, we now know that carpet stain remover can be substituted for clothes stain remover.

Also, for the record, Karen became the first woman in our Church known to participate in a Sunday School lesson pants/dress-free.  The clothes had about dried as the lesson ended and Colleen’s clock read 10:00 — remember she was the scripture reader this morning and that comes very very early in the 10:00 service.

That’s when Karen decided she’d better get her sweater back on.  Of course that’s also when the zipper of the sweater snagged on her blouse.  That’s also when the bells pealed to signal the start of the service.  Now Karen was due on site in minutes as she sat clad in her lingerie with her pants in the dryer and her sweater and blouse badly intertwined while hung up high on her chest.

A breathless wide-eyed Karen dashed into Church barely in time to read the Scriptures, but not before announcing to the entire congregation that they were lucky she had her pants on.

Still rattled she had to face Communion.  Her job — hold two cups, one filled with wine, the second, grape juice.  Now behind her when she served Communion were just two steps and her final duty was to mount those two steps and put the two vessels back on the altar.  Just two steps.  Only two.  She cleared one.  The grape juice flew onto the rug.  The wine into her face, onto her blouse and into the Baptismal font positioned at the top of the steps.  From my pew seat it looked like Karen was Baptizing herself as she washed wine out of her eyes with water from the font.

At the end of the service I couldn’t help but notice when I turned to the closing hymn, I first alighted on the preceding hymn:  My Lord, What a Morning.  We should have sung that one.  I gave Karen a ride home. 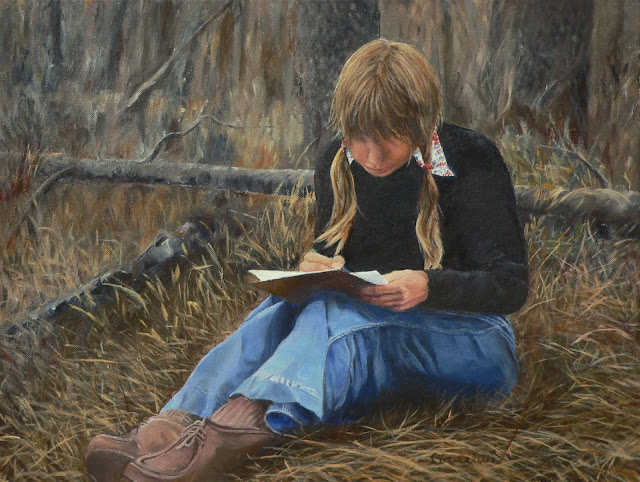 This is an older painting I did of Karen of another memorable morning, OK maybe it was an afternoon, but it was one of those days that sent my heart racing as I fell in love with this gentle lass.
Posted by Don and Karen Cornelius Artwork at 10:28 AM No comments: 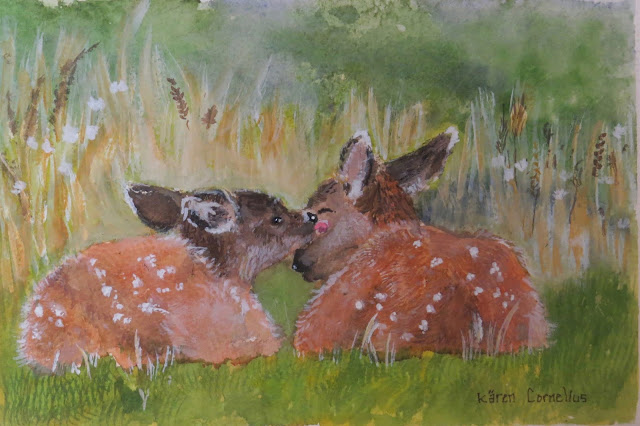 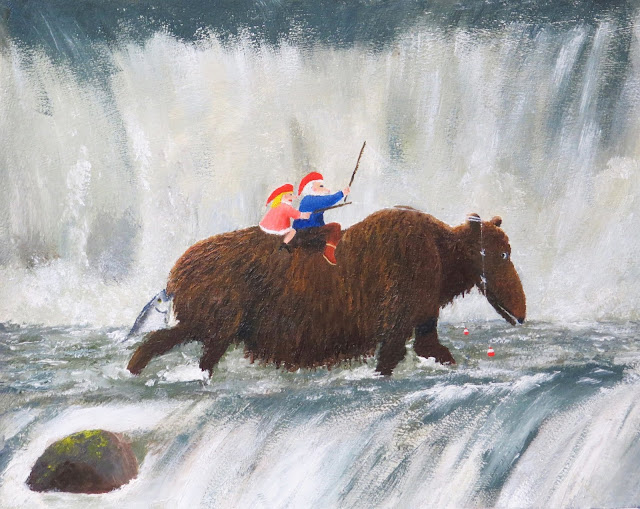 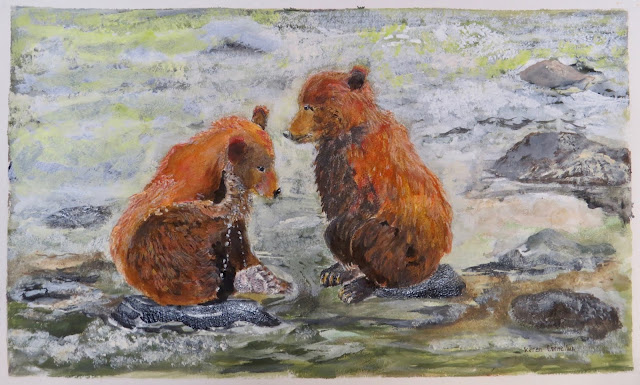 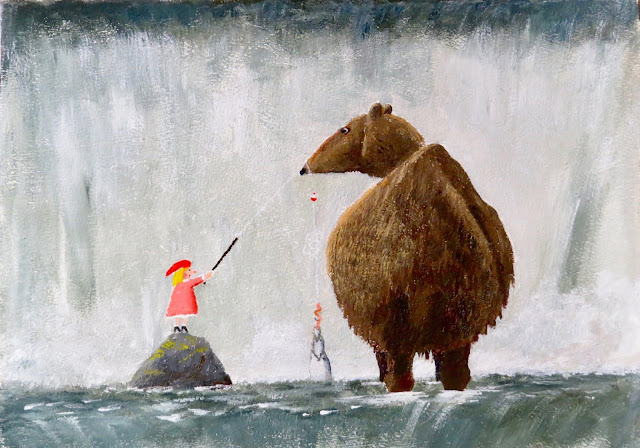 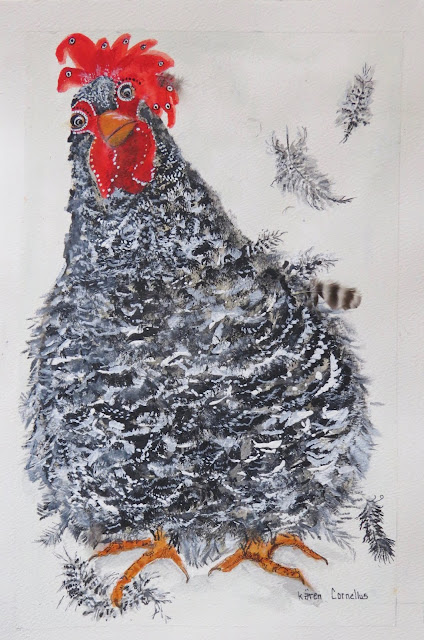 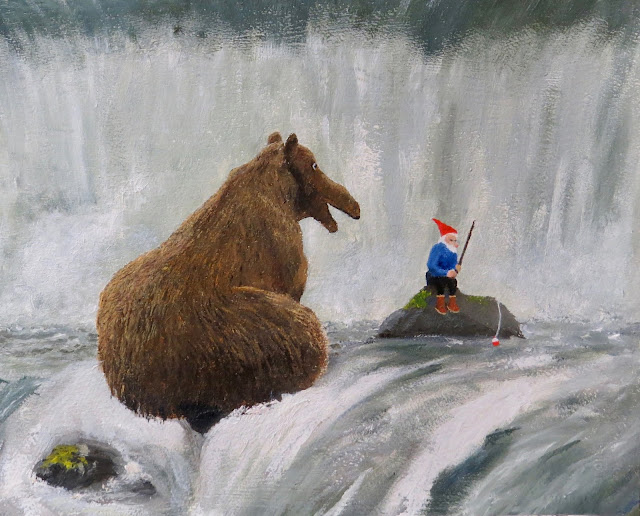 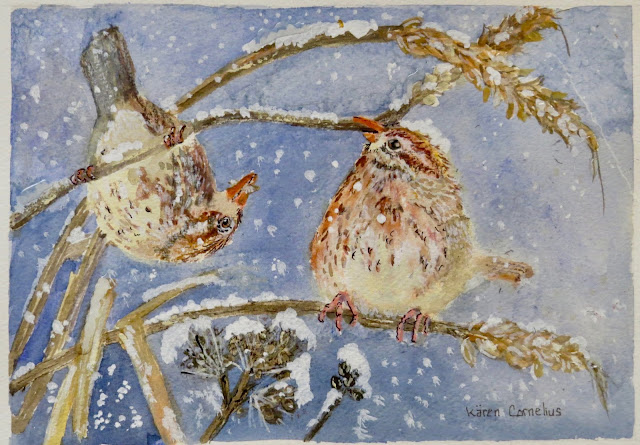 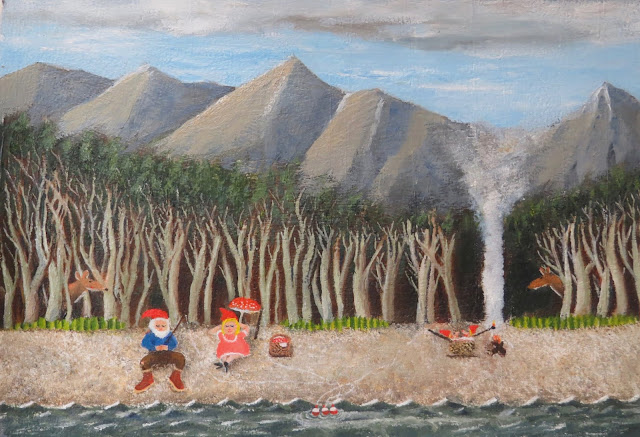 Don's    A Gnome Family Outing On The River    Alkyd
This piece didn't fare so well with the top of the mountains and one deer perishing when they were cut out of the painting.
Posted by Don and Karen Cornelius Artwork at 3:09 PM No comments: