In the early 1970s, the Palmer game warden, Fred Smith, occupied the corner office two doors down from where I was stationed as an Alaska Department of Fish and Game game biologist.  Well past retirement age with fleeting eyesight and a receding gray hairline, Fred still made as many cases as the best of them.

The reason: people identified with this friendly grandfatherly gentleman.  Fred didn't have to sneak through dense willow thickets to pounce on poachers.  Everyday citizens, fed up with seeing someone else steal their moose or salmon dinner, simply reported violations to Fred.  He excelled at being a kind old man telling stories about the good old days.  The public reciprocated with modern day versions.

My opportunity to assist Fred came the night I registered for a mid-winter watercolor painting class.  Returning home that frigid night on the winding remote (at that time) Matanuska Valley roads, a parked car seemed out-of-place.  Strange, I thought, so slowed to read its license plate number.  The notion that something didn't seem right gnawed at me until back home, I turned around and drove back.

The car had disappeared.  Instead I found blood in the road.  Armed with a flashlight, my boots squeaking in the cold, I followed a trail of crimson flecked snow to a steaming moose gut pile.   Back home I dialed Fred.

Fred said he would check on the license number.  A few minutes later my phone rang.  It was Fred.  Rumor had it the owner of the car whom I shall call "Robert" was a moose poacher who sold the meat to the poor.  Fred still hadn't been able to make a case against this supposed modern-day Robin Hood.  He said Robert would be at the Pioneer Cafe the next morning.  I should meet him there.

At 7:30 AM, sure enough, I found Fred standing in the Pioneer Cafe parking lot next to the drab weathered sedan I had seen the previous evening.  The key to the trunk remained fixed in place, obviously ready for quick action.  Fred twisted the key.  The trunk popped open to reveal a blood-stained interior and moose hair, not the typical trunk used to transport suitcases to the airport.  Fred directed me to collect a blood sample on a microscope slide and close the lid saying he'd be right back.  I complied then dashed inside not wanting to miss the action.

Inside the Pioneer Cafe Fred found a tall angular man clad in Army surplus "bunny boots" wearing a grease-stained parka right where he knew he'd find him, sitting at a counter stool in front of a plateful of bacon and eggs.

Fred approached Robert and with a friendly smile, simply said, "When you're done, come on over to my office," and left.  That was all.  That's sure not how they do it on TV, I thought to myself.

Fred and I went back to our respective Fish and Game offices and waited.  It didn't take long before I saw Robert slouch past my door.  I listened intently.

"You never know when your friends are going to rat on you," I heard Fred say.

Of course Fred was only making up a story, but that sounded like a confession to me.

After more unsuccessful pleading from Robert about how Fred knew,  I heard Fred state, "we need to go get the meat, it would be unlawful to leave it where it was."

I couldn't believe what I was hearing.  "Unlawful."  Since when did that bother Robert?  However, he fell for Fred's bluff and with that the two of them got up and Robert led Fred to the evidence -- the evidence Fred needed to make his case, a case for which Robert spent six months in jail.

Today I muse at the chances.  My love of art led me down that road.  I had been disappointed that all we did was register for the watercolor painting class, receive our materials list and an announcement the class would begin the following week.  Feeling let down, I drove home hours earlier than expected that evening.  Later, when class would normally have ended, Robert would have vanished and, at best, I might have seen blood on the snow-covered pavement.

Otherwise, a flock of ravens, maybe a pair of eagles at the top of a cottonwood tree would have alerted us that another moose had been poached.  Why didn't we ever catch these guys?  Chances -- chances and a bit of bluff from a kind old man broke the familiar pattern leading, for once, to frontier justice. 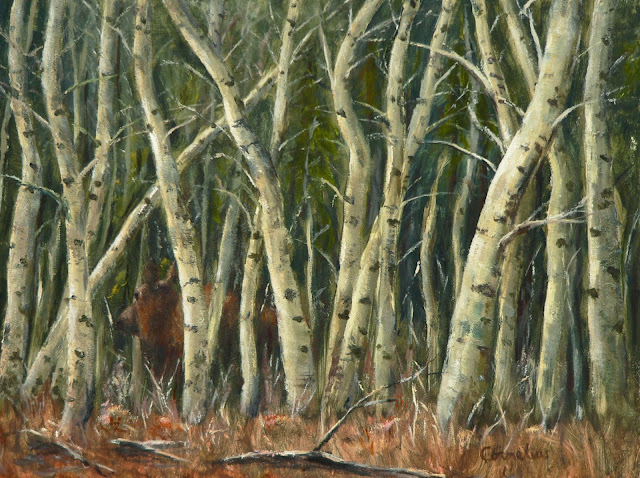 Other than a whimsical watercolor card, this is the only painting I have which includes a moose,  Thus, wanting a moose painting for this post, it'll have to do.  I started Dance of the Aspens as a plein air piece in the Yukon.  There I was drawn to the aspens battered by wind and snow to take on every manner of twisted shapes.  I didn't complete the painting that day, so brought it home to finish in my studio.  As for the moose, she's an add on from a photo Karen took in a similar area Fred would have patrolled although, given his poor eyesight, probably never would have seen.  In fact, neither did I.  But, Karen did.

Posted by Don and Karen Cornelius Artwork at 7:46 PM

I’ve always believed in “timing is everything.“ Your well-written story illustrates that perfectly. Now I’m curious… Had the moose been hit by a car or did Robert shoot it?

Hi Gigi: Robert shot it and finally got caught after supposedly shooting quite a few moose.

What a story! (Who packs dead moose in their trunk, yuck!)

I hope you will share more like this—very few people have gotten to see the things you have.